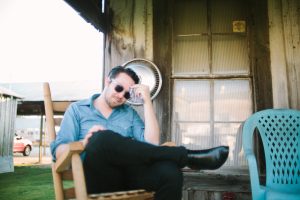 Some may know Shane Tutmarc as the front man for Seattle-based indie-pop band Dolour, which featured Robin Pecknold (Fleet Foxes).  However, after packing up Dolour, Tutmarc packed his bags in 2010 and moved to Nashville, where he refined his sound, blending garage-rock, folk, blues, country, gospel, and pop to create an Americana flavor that pays homage to its predecessors, but also knows when to expand on and experiment with different influences.  The result is something that has been described as Nashville rock-n-soul; but, after one listen to Tutmarc’s music, you won’t be worrying as much about labels and genres as you will be singing along.
Having recorded a full-length in Nashville, Borrowed Trouble, which has since been placed on the back burner due to an investor in the album pulling out at the eleventh hour, Tutmarc has kept busy playing around Nashville and the Northwest, as well as producing other artists.  However, he recently has decided to release a single a month throughout 2015, with plans to compile the songs and release a full-length in 2016.  The singles will be released by Portland, Oregon-based indie, In Music We Trust Records.
Today, Ghettoblaster has the pleasure of premiering the video for “When You Found Me?,” which you can enjoy below.