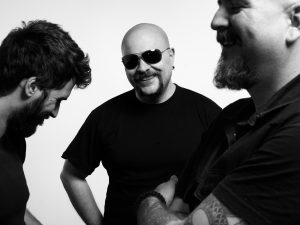 Two years after the release of their promising debut and a few months after the 7-inch- “Obscure,” Mechanimal are back with their second album, titled Secret Science.
Secret Science was recorded in the band’s studio in Athens, Greece, during the winter and spring of 2014. It was written and produced by Giannis Papaioannou, the founder of the band with a long history in the Greek post-punk and electronic scene.
As a dynamic ensemble with vocalist Freddie Faulkenberry, Kostas Matiatos on electric guitars and Angelica Vrettou on the visuals, Mechanimal’s Secret Science speaks of the need for survival and recounts tales of a restless urban environment. Each track, as a lyric theatrical one-act, opens new avenues to the sonic palette of the band, where narrative aphorisms, analogue synthesizers, underground dub rhythmic passages and angry guitars compose the unique code of their secret science. Ten drone ‘n’ roll stories from those you do not hear in the news, but rather discover in the streets of a city that stays awake by the sounds of sirens.
Inner Ear records will release a limited edition release of Mechanimal’s new album for Cassette Store Day on September 27.The street date for their second album is October 10.
Ghettoblaster has the pleasure of premiering Mechanimal’s music video for the title track today. Enjoy: