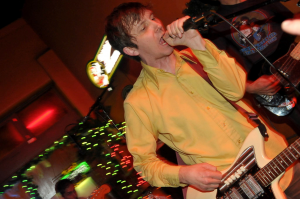 Tim Krug is perhaps one of the most focused, prolific, and frankly, busy, multi-instrumentalists in Dayton, Ohio. In addition to playing with rock quartet Oh Condor, he debuted his band Swim Diver (with members of Brainiac, Captain of Industry and Me and Mountains) late in 2013, and plays with the decidedly more experimental Hexadiode (formerly Dementia Precox). He was also instrumental in organizing a recent reunion of 4/5 of the members of Brainiac to perform as We’ll Eat Anything at a benefit concert for the daughter of his former Human Reunion bandmate who passed unexpectedly in 2012. During the performance, Krug provided guitar, keyboards and vocals.
Ghettoblaster is shocked that he had time to listen to music in 2014, but he was willing to offer us a list of his favorite records. Here they are.
Ok. I sifted through my brain box and came up with too many releases and then I realized that some of them were EPs, so I split them off into their own “top 5” (get it? because they’re EPs?).
I’ve listed them alphabetically, because after #1, I couldn’t really rank them any further (I’ve easily listened to Liars’ Mess and Roomrunner’s Separate more than anything else this year).
LP
Aphex Twin, Syro
Braid, No Coast
Cheatahs, S/T
Dead Rider, Chills on Glass
Final Club, Final Club
Lab Partners, Seven Seas
Lees of Memory, Sisyphus Says
Liars, Mess
Swearing At Motorists, While Laughing, The Joker Tells The Truth
Vertical Scratchers, Daughter of Everything
EP
Baths, Ocean Death
Pretty & Nice, Infinitely Forever
Ringo Deathstarr, God’s Dream
Roomrunner, Separate
Thom Yorke, Tomorrow’s Modern Boxes
(Visit Tim and Oh Condor here: https://www.facebook.com/ohcondor and http://www.ohcondor.com/.)