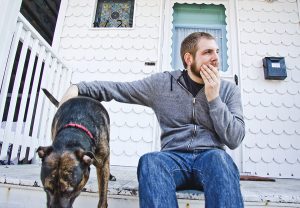 Chicago’s Matt Arbogast, who performs under the moniker The Gunshy, released his first proper album in five years in September. For the record, Silent Songs, he assembled a robust cast of collaborators and pulled out all the stops.  A bit of a departure from his Waits-leaning, bar room prophet past, Silent Songs offers swells of strings, horns, gang vocals and tracks with a much quicker pace than the finger-picked ballads he’s known for.  As the saying goes, “If it ain’t broke, don’t fix it.”  Well Silent Songs isn’t a fix, but a reinvigoration of a powerhouse songwriter with time-tested chops. Ghettoblaster recently caught up with Arbogast to discuss some other bands with chops and his favorite releases of the year. Here they are.
Andrew Jackson Jihad, Christmas Island
Sean’s lyrics on this album are some of my favorite from anyone, anytime. There’s lines on this record that make me laugh and break my heart at the same time. “I’m a blank page in a notebook waiting to be filled with countless drawings of cocks. I’m a bathroom wall freshly painted over to cover up swastikas and the names of girls that we called sluts.”
Water Liars, S/T
I was passing through on tour and had a chance to stop by the studio on the last day they were mixing this record. The first time I heard ‘I Want Blood’ it gave me chills. It still does.
Joyce Manor, Never Hungover Again
I must have listened to this record seven or eight times a day for a month after it came out. My favorite of theirs to date and fantastic production.
Sturgill Simpson, Metamodern Sounds in Country Music
I wish I’d written ‘Living the Dream’.
Against Me!, Transgender Dysphoria Blues
Holy shit. An intense and beautiful record.
Sun Kil Moon, Benji
I’ve used the “repeat song” function for the first time in years because of the song ‘Jim Wise.’
Cheap Girls, Famous Graves
A really great melodic rock record from start to finish.
The Smith Street Band, Throw Me In The River
Man, the song ‘Calgary Girls’ is a killer.
Justin Townes Earle, Single Mothers
It took me a little longer than his other records to settle into this one. The production is a little less traditional country. ‘Picture in a Drawer’ might be my favorite song of his.
Restorations, LP3
This record is such a treat sonically. A great headphone listen. Some of my favorite songs of theirs are on this one too.
(Get the album as a pay-what-you-want download here: http://www.thegunshy.com/.)