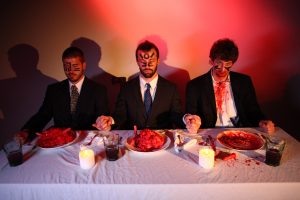 For Lazer/Wulf’s 2014 album, The Beast Of Left And Right, the ambitious trio constructed an entire, full-length work of technical, yet melodic, metal that forms a palindrome pushing the band into brain-twisting new territory as songwriters and instrumentalists. It is a face melting and deeply listenable record made by some of the nicest dudes ever. It was also released by some of the nicest people ever at Retro Futurist Records.
Ghettoblaster recently caught up with the band to ask about some other 2014 records that twisted their brains. This is what they were digging.
We’re currently on tour, so choosing music in the van usually leads to some sort of debate. Our tastes rarely overlap, so finding that sliver of our overall Venn can be a bit of a puzzle. Driver gets the most weight in the electorate, of course, but it’s only those special somethings that are actually unanimous. Here are the 10 albums that most often spun on the 2014 touring gauntlet, in no order.
Lord Mantis, Death Mask
Wizard Rifle, Here in the Deadlights
Thantifaxath, Sacred White Noise
Run the Jewels, RTJ2
Mutoid Man, Helium Head
Every Time I Die, From Parts Unknown
Morbus Chron, Sweven
Gridlink, Longhena
Aphex Twin, Syro
Yautja, Songs of Descent
(Visit Lazer/Wulf here: http://www.lazerwulf.com/.)