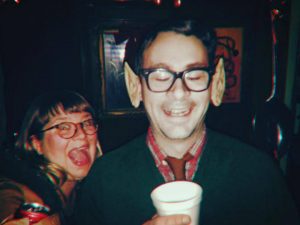 In 2013, the debut EP of San Francisco’s jangle darlings Cruel Summer hit the streets. Reminiscent of the mid to late ’80s C86 and SARAH sound with a dash of 4AD’s hazy early ’90s catalogue, Cruel Summer offered up six tracks of shimmering guitars and hazy, fuzzy pop on the black wax and was a nod to hours spent as a teenager in the late ’80s digging through NME and Melody Maker issues to find out who the secret overseas DIY pop hit-makers were.
Ghettoblaster recently caught up with Cruel Summer’s Josh Yule and Thea Chacamaty to find out who they believed 2014’s hit makers were.
Terry Malts – insides ep (slumberland)
It’s not everyday I find a 7″ that gives me vertigo from flipping it over and over every two and a half minutes. Side A boasts two pop gems to pump your fists at until you realize these songs are freakin dark man. Side B’s “Don’t” will be my favorite Terry Malts song for life. Beautifully written lyrics that really hit close to home about loosing grasp of your home/haunts to start a new all wrapped up with stop, starts, and feedback. Nice work guys! Oh wait, I failed to mention the minute and a half Chills cover of “hidden bay” at the end. Magnific…
Vaniish – memory work (metropolis)
I had been eagerly anticipating this album long before it was even recorded. After hearing  Keven Tecon and Amy Rosenoff were revamping their band Veil Veil Vanish after taking a break to take on as the rhythm section for Wax Idols I was stoked. And this album was sure worth that wait. Vaniish give my ears that Chameleons-esque vibe at times with a spruce of Clan of Xymox. I certainly hope to hear more from them in the future.
David Kilgour and The Heavy Eights – End Times Undone (merge)
Yeah sure I know, who doesn’t like the Clean but doesn’t it suck when the dude from one of your favorite bands keeps on making mediocre music that almost but never seems to hit the highpoint their old band always seemed to. Well in this case Mr Kilgour is the exception, and he has been making records for over 30 years now. Every song is strong. End times undone is one of those albums you physically cant skip through, It weighs you down to the nearest chair and takes flight. In fact I am listening to it right now. “Dropper,” first song side b is the jam.
Dead Leaf Echo – true. deep. sleeper (moon sounds)
Sadly this record has only four tracks but every single song is a complete zinger. Side a’s true deep sleeper and so wrong are upbeat and belong resting against some of those early ’90s creation albums and singles I adore so much. Side b travels a different departure all together a la 4ad, “it’ll end in tears.”  Cruel Summer has had the privilege to share the stage with these east coasters twice and I am only left wishing for more.
Laetitia Sadier – something shines
Once you’re a stereolab fan it’s for life. Laetitia Sadier’s new album is not dark as 2010’s “the trip” or as Jobim ladened as 2012’s silencio, but certainly has that sound that is undeniable stereolabs, (err or should I say The United States of America’s self titled sound, Silver Apples, Terry Riley whatever). Something shines has all those beautifully picked bass strings, dampened snare hits, and soft monotone vocals you are expecting with a little less farfisa. If it’s not broken, don’t fix it.
Dissolve – st/ep (painter man)
Inna Kurikova and Blaine Patrick have been making music together for quite sometime now. Last years Modern Charms EP they released together was a joyride full of wild turns and feet nestled up on the your best buddies dash. But Dissolve gives me the feeling they may have been aiming for this the whole time. I have seen a few incarnations of Dissolves lineup but one thing always stands true to form, the connection between Inna and Blaine. Perhaps Blaine is the the bow to Inna’s cello.
Alex G – DSU (Orchid Tapes)
This baby genius’ record has been stuck in constant rotation for me since it was released. I’m a sucker for bedroom pop, and this is one of the best examples of it: ambitious arrangements, winding guitars, and shy vocals that always seem to be holding back just a little bit. I love you Alex G. Come back to San Francisco.
Cold Beat – Over Me (Crime on the Moon)
One of Hannah Lew’s post-Grass Widow projects–Lew officially proves to me that she’s my favorite Widow. Over Me is crammed with hooks from the infectious choruses of such jammers as “Worms” to “Tinted Glass”: an elegant, heartbreaking take on the Google buses that crawl along our streets here in SF. Is there anything this lady can’t do? Her music videos are incredible lo-fi works of art (she is the auteur of many local bands’ vids: the Mantles, Wax Idols, Tony Molina), and then she brings this gorgeous post-punk record into my life? What’s next, will she make the BART trains run all night?
Smiles – S/T cassette (Death Records)
Smiles are part of the guard in SF that has started to creep in as all the garage rockers gave up and moved to LA. Smiles are obsessed with britpop, delay pedals, and anoraks. Manny is a brilliant chameleon of a songwriter. Every time I see Smiles they have a different line-up and this is one of reasons I love them–they’re always changing but they will always sound a little bit like Spacemen 3.
Real Estate – Atlas (Domino)
When I first heard Atlas I was like, “Oh, another incredibly chill album that sounds like the Feelies on Percoset.” But then I realized that is NOT a bad thing.
(Visit Cruel Summer here: https://www.facebook.com/CruelSummerSF.)