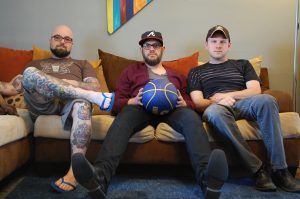 2014 was a huge year for Dayton, Ohio rock heroes The 1984 Draft. On April 1, the band released their latest EP, Bo Jackson Up The Middle, via We Want Action (84 Nash, She Bears, Tiara).  The EP, a The Replacements, Bob Mould, and Smoking Popes leaning affair, was recorded at Popside Studio with Micah Carli (guitarist for Hawthorne Heights) in mid-January 2014.
The EP saw the light of day in advance of the release of an NFL Network documentary on the actual 1984 NFL Draft, in which the band is featured.  NFL Films captured them live in the band’s hometown on January 10, 2014 and the documentary aired on April 30 at 10 pm on the NFL Network.
While I did not necessarily purchase a ton of music released this past year, I did find myself discovering some albums from the past few years that I had missed. That being said I have put together my top 10 list based on the albums that really got me in 2014.
10. Jason Isbell – Southeastern (2013) – I admit there are a few duds on this album, but songs like “Cover Me Up” and “Live Oak” fully make up for it. Plus I am a sucker for genuine southern drawl.
9. Cliffs – Saturation (2013) – We have had the chance to play with Cliffs twice in the last year and they are quickly becoming one of my favorite Columbus bands. This album is gritty. Kind of reminds me of an indie rock version of Iron Chic. This album is great start to finish.
8. The Raging Nathans – Losing It (2014) – Sometimes you need to feel like a kid again. Sometimes you need a little punk and angst in your life to get back the edge back after sitting in a cubicle all day. The Raging Nathans are that edge for me. “Tooth Song” is my jam on this record.
7. Kurt Vile – Wakin on a Pretty Daze (2013) – When I need to get lost for a while I put on this album and just drift through the haze of fuzzed out guitars. Not sure I ever want to see it live, but this is the perfect album for a fall or winter walk or a lazy Sunday afternoon.
6. Meridian – Aging Truths (2012) – I was familiar with Max Stern’s previous body of work with his full band Signals Midwest. I was fortunate to play with him on his last tour with The Gunshy and was introduced to this album. Max is a gem of a songwriter and this album proves it. This album is full of great melodies. I now don’t know which I like better, Signals Midwest or Meridian. I guess I’ll just have to enjoy his songwriting as a whole. I look forward to listening to more of his catalog.
5. Tender Mercy – As Someone Else You Embrace The Moment In Us (2014) – I had the chance to do a run of shows with Tender Mercy this spring. Mark Kramer is an amazing dude who maximizes his minimalistic sound to deliver beautiful sentiments. This EP is a perfect example of that.
4. Cheap Girls – Famous Graves (2014) – Despite waiting an extremely long time to receive the vinyl release of this album, Cheap Girls don’t disappoint. Basically, they take all of my favorite parts from bands like The Smoking Popes and Superchunk, and put them into a perfectly placed three-minute song. This would have been higher on my list if I probably hadn’t overkilled it right off the bat. I want to eat pizza and drink Pabst with this band.
3. Swearing at Motorists – While laughing the Joker tells the Truth (2014) – Dave Doughman writes perfect short pop songs. I could listen to his voice all day. Throw on top of this release, the videos of director Mike Postalakis for this album and this is a perfect introduction for “The World’s Local Band.” “Groundhog Day (Damn the Piper)” is my choice hit.
2.   Mike Adams at his Honest Weight – Best of the Boiler Room Classics (2014) – I have to thank my girlfriend for introducing me to Mike Adams. His live show was the best I saw this year and this album brings me the same joy of being able to recreate that night over and over again in my head. Add on top of it that Mike is probably one of the nicest men in rock and roll today. Number 2 with a bullet.

(The 1984 Draft’s EP is available via iTunes https://itunes.apple.com/us/album/bo-jackson-up-middle-single/id836437528, Spotify, eMusic, Rhapsody, and Amazon.)