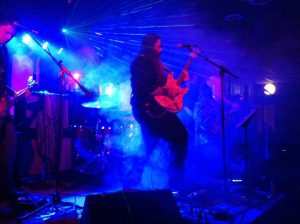 Earlier this year, Dayton, Ohio’s Cricketbows completed their latest LP, Diamonds, which is scheduled for release in 2015. The album was recorded in the spring of 2014 at The Diamonds in Cincinnati, Ohio, and produced by Grammy-winning producer Brian Olive (formerly of Soledad Brothers and The Greenhornes). It was mastered by Dave Davis.
Diamonds is the first Cricketbows album to feature a full band, consisting of Chad Wells (vocals, guitar), Aarika Watson (vocals, flute), Michael Bisig (guitar, backing vocals), Christopher Corn (bass, backing vocals), and Jim Ingram (drums). It showcases a psychedellic, classic rock-leaning band who is at the top of their game. Ghettoblaster recently caught up with Wells (also of horror punk band The Jackalopes) to discuss some of the 2014 release that showed other bands at the top of their game.
10. Eyehategod – Eyehategod
This doesn’t need much of a statement as to why this album ruled other than to state the fact that I’m amazed that we got a new Eyehategod album in 2015 and if you don’t understand that, you don’t understand Eyehategod. First new album from this 20 something year old band in 14 years. Always essential. Dark and heavy.
9. Triptykon – Melana Chasmata
Tom G. Warrior still plays dark as fuck metal. Still says “UGGH!!” just at the right moment and makes me want to shake my hair really hard. For fans of Celtic Frost.
8. First Aid Kit – Stay Gold
These girls hypnotize me. Voices so lush and harmonious and real. Great lyrics. Great playing. A perfect modern folk record.
7. Sleepy Sun – Maui Tears
Saw the band live on this tour with Buffalo Killers (more about them a little higher up the list). These guys are the purest, distilled psychedelic rock. Think Jane’s Addiction without the drag fixation filtered through early (very early) Soundgarden. Drone rock that sways. These guys kill every time.
6. Neil Young – A Letter Home
Impressive, super personal collection of songs from Father Neil. As stripped down as you can get and still be playing stringed instruments. Recorded in a booth in Jack White’s record shop. A postcard from a legendary voice.
5. Brian Olive – The Move EP
Brian Olive, solo artist, former member of The Greenhornes and Soledad Brothers delivers the groove. Sounds like it was recorded in the middle of the first wave of Motown with members of The Kinks and The Beach Boys jamming with members of Ray Charles and James Brown’s groups and then sent via psychic energy to a midwestern multi-instrumentalist who is stranded here in our current time and space. Brian produced my band Cricketbows’ new album that will someday see the light of day (aiming for 2015) and he’s one of the most down to Earth cool cats in the world. A nice handful of minutes that’ll make your head bob.
4. Cricketbows – A Congregation of One
And now, from the “then I played my own shit, it went something like this” folder… Since our aforementioned, Brian Olive produced album isn’t available to the public yet, I’ll have to go with this digital only Bandcamp release from my own band Cricketbows. It’s a collection of the best stuff from the first three albums (referred to as “The Original Trilogy”). Congregation Features myself and a little help from Andy Gabbard (Buffalo Killers) and Roger Joseph Manning Jr. (Jellyfish, Beck) on a few tracks each.
3. Buffalo Killers – Heavy Reverie
Buffalo Killers first album of 2014 – full of insanely well crafted songs. There’s not a clunker on the whole damn platter. I put these guys up there with The Beatles, Buddy Holly, The Everly Brothers, James Gang, Big Star and Nirvana… They get lumped in as retro revivalists but this album kicks that idea squarely in the nuts. They’re not pretending to be a “classic rock” band, they just are a classic band.
2. Chris Robinson Brotherhood – Phosphorescent Harvest
Where else can you get tumbleweed guitar boogie laced with weird and otherworldly keys and words from one of rock’s finest mouths? In the freak fold that is the CRB, that’s where. Carrying a torch that is all at once Grateful Dead and Traffic, Delaney and Bonnie, Cream, Flying Burritos and The Grease Band. These guys get onstage with no bullshit – no pretense – nuthin’ fancy – and they play their asses off. These guys will pluck you up from your workaday world and drop you in the emerald triangle where you’ll await teleportation to some peyote soaked landscape that could be Joshua Tree or Mars and back out through the cosmic birth hatch into a world of fractals and far out sound. All day long, freak flags flying free!!
1. Buffalo Killers – Fireball of Sulk
When I was asked to create the artwork for this album I though Zach said “Fireball of Suck” and this record is anything but that. BuffKillsBros flex their muscles on this one and almost dig up some Zeppelin bones – like Sabbath with (a way more apparent) Beatles fetish filtered through Husker Du jamming with Blue Cheer. But way better than all of those comparisons. Go get some!!!
(Visit Cricketbows here: http://www.cricketbows.com/.)