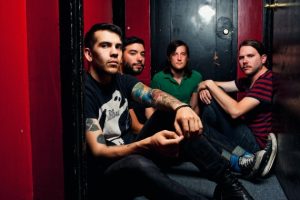 Year of the Snake, which was released in March 2014, is Silver Snakes’ first full-length in nearly three years, following 2011’s Pictures of a Floating World'(as well as 2012’s Old Light single and last year’s split EP with Souvenirs and ‘Sundance teaser). Their sophomore effort builds on the promise of those releases, delivering a heavy, uncompromising, metallic post-hardcore/alternative hybrid experimentally touching upon both ends of the rock spectrum, from sludgy forays to acoustic detours and a snarling melodic sensibility spread throughout.
Ghettoblaster recently caught up with Silver Snakes’ vocalist, guitarist Alex Estrada (also of Earth Capital) to discuss other uncompromising releases from 2014. This is what he was digging.
1. Wovenhand, Refractory Obdurate
2. Everybody Row, The Sea Inside
3. Thou, Algiers
4. The Black Angels, Clear Lake Forest
5. Cloakroom, Lossed Over
6. Pianos Become The Teeth, Keep You
7. Mariachi Reyna De Los Angeles, Entre Mariachi y Corazon
8. Windhand / Salems Pot, Split
9. United Nations – The Next Four Years
10. Twin Oaks, The Lion’s Den
Honorable mentions – (these would have made the list had I not been involved in the production.. I feel weird about that)
Silver Snakes, Year Of The Snake
Joyce Manor, Never Hung Over Again
(Visit Silver Snakes here: http://www.yearofthesnakes.com/.)