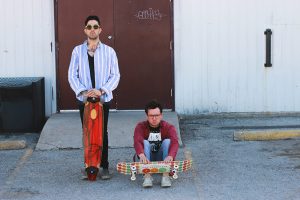 Texas’ Vetter Kids are set to release EP 3 May 20 via Texas Is Funny Records. 3 is the follow up to the well received split single with label mates Glish and Young///Savage. Vetter Kids emerged from San Antonio and Austin, TX’s dynamic punk scenes having played in Sohns, Yes Inferno, and Brother/Ghost before joining together. Their debut EP 3 is the product of a youth spent listening to grunge and punk music, adopting the sounds of their influences and molding them into something new. There’s an undeniably bleak tone to the EP and yet the sweeping atmospheric songwriting, buzzing guitar anthems, and sharp rhythmic bursts sound anything but detached. Vetter Kids are a young band taking their time to perfect a blend of crashing grunge heaviness and spaced out shoegaze bliss.
No, they do not love Pearl Jam. Yes, they do love large speakers, fuzz pedals, Pinkerton era Weezer, Refused, singing during long car rides, Small Brown Bike, The Get Up Kids, Jason Molina, skateboarding, The Smashing Pumpkins, and… pizza.
As such, Ghettoblaster recently caught up with Marcos Gossi and Richard Garcia to discuss skateboarding.  This is what they told us.
When did you begin skating and what is it about skating that continues  to appeal to you?
Marcos:  I started skating when most kids do, middle school. It’s when  you decide what kind of man/woman you want to be; I think that’s  important.
Richard: I didn’t have the luxury of growing up on a coast so this was the next best thing to surfing. And liking heavy metal music basically meant that you only could hang with the greasy skate kids in my middle school hahahah
Do you play places on tour that also allow you to skate inside or outside?  What are the best places you’ve skated on tour?
Marcos: When I was younger I think that was more important to me, now  a days an empty lot or church will do just fine.
Richard: Naaaa I think the three of us bleed plenty on stage each night to want to expend any other energies . (Ps Marcos is a bleeder.)
What is the most difficult trick that you’ve landed?  How does the feeling of landing that compare to the feeling of conquering a difficult riff or part in your music?
Marcos: Let’s be clear, I suck at skating. I love to do it and I really don’t give a shit if I suck, but I know I suck. That being said, my repertoire is pretty basic, heel flips and kick flips are about as hard as I go. Ask me to Ollie off a roof though? Yea, I’d do that.
Richard: The most difficult trick was this one white girl at this club I used to go to a lot here in town. Girl had a big booty and basically ate my billfold in cocktails. But we ended up back at my place where I sang her love songs on my ukulele.  Zing.
What kind of deck, trucks, wheels, or other gear are you currently using?
Marcos: I’ve got my old Baker, and then the label gave me a board, which I’m breaking in. At the moment, I skate Independent trucks and  Bones wheels.
Richard: A Sector 9 with a lot of flex and Bones bearings. Those abec 3s they always come with are shit and one kick push on bones and I’m cruising foreverrrrrrrrr.
What other bands who have members who skate have you toured with and skated with?  Were you impressed?
Marcos: I usually just skate alone, But the dudes from Sixteen and Ghost Police would be my choice. And even if you can just kick-push I’m impressed.
Richard: Skating is more of a solo thing for me BUT if I had to pick some Brobocops I know it would have to be all the dudes in Ghost  Police and Mario Trejo from The Grasshopper Lies Heavy
Do you seek out skate shops on tour?  What are the best ones?
Marcos: When I was younger I used to, but lately gear shops take up most of my time. Though Uprise in Chicago is always fun to pop into.
Richard: No not at all actually. I think the three of us are too focused on getting to the next town and wrecking shop, to be honest, instead of looking for a shop.
What is the worst injury that you ever suffered skating and how did you recoup from that?   Did it affect your playing?
Marcos: I’ve fractured my right hand like eight fucking times, I think half were trying to jump a gap or stairs. Actually, yea man. After I am done with rehearsal my right hand is always kind of swollen and tender, but fuck it. Fun is the name of the game.
Richard: One time I was bombing a righteous hill and I ate it bad in front of a group of hot chicks. My ego REALLY took a hit that day and I’ll never forget it. I’ve continued to learn from that situation every day since.  (Zzzzzzzing)
Which of your band’s songs are the best to skate to?
Richard: None of them. Go listen to Little Big League.
(Visit Vetter Kids here:
www.facebook.com/vetterkids www.twitter.com/vttrkds www.vetterkids.bandcamp.com.)