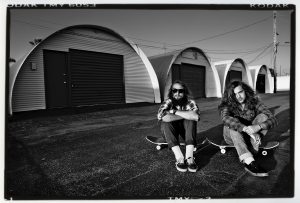 It’s not surprising that The Picturebooks recorded their 2014 album, Imaginary Horse [RidingEasy Records], in the same garage where they regularly refurbish and repair motorcycles and choppers. The German duo—Fynn Claus Grabke [vocals, guitar] and Philipp Mirtschink [drums]—capture a raw, rich, and real energy befitting of the room’s natural reverb, industrial aura, and spiritual spark. Most importantly, the record also begins to rev up the boys’ career like never before.
Fynn and Philipp first crossed paths at a local skate park. Becoming fast friends, they realized their mutual interests extended beyond shredding half-pipes and into music like The Smiths, The Cure, and Minor Threat. Soon, they began writing songs together, utilizing equipment Fynn’s dad Claus had accumulated over his years as a musician and record producer. After two independent releases in Europe, the pair played major festivals such as Sziget and toured with everybody from International Noise Conspiracy to Spinnerette. Simultaneously, they garnered international attention for their motorcycle builds and received prominent profiles in tastemaker music publications.
Although the album (out October 7) is worthy of its own feature, Ghettoblaster couldn’t pass up the opportunity to chat with Fynn (son of famed ’80s skateboarder Claus Grabke) about skating. This is what he told us.
Do you play places on tour that also allow you to skate inside or outside?  What are the best places you’ve skated on tour?
Both of us skate. We try to skate as much as possible on tour, but we also try to avoid getting hurt, cause if we break an arm or something like that we will risk having to cancel shows or even worse, a whole tour. So we try to keep our skating low-key but there´s always fun stuff to skate in clubs, even if it’s just benches or curbs…that can be a lot of fun.
We always have our boards with us, so we can scan the area where we´re at. when you´re on tour you often find yourself in the inside of all these clubs around the world and don´t get to see anything of the cities you play in. It´s always great playing at clubs or festivals that have a mini-ramp or pool. we´ve played that one club one time, I can´t even remember where that was, and there was a skatepark in front of the club. We had a session with half of the crowd. That was awesome! 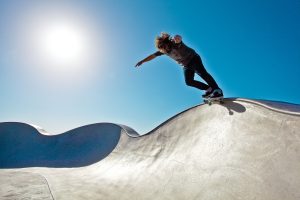 What is the most difficult trick that you’ve landed?  How does the feeling of landing that compare to the feeling of conquering a difficult riff or part in your music?
That´s a difficult question to answer, cause I think skateboarding can´t be measured like that. Skateboarding is always best when it’s fun! When I was sponsored, it was more about the difficulty of tricks, (how high can you ollie? how many stairs can you kickflip etc.) and I lost the fun in it. Now I just skate for fun. my favorite things to do on a skateboard are backside smithgrinds, backside and frontside tailslides, long 5-o grinds, ice-plant.
It´s the same in music. Playing a complicated riff or something like that, doesn´t mean it´s a good song. it´s often the complete opposite cause you´re pushing it too much and if you hear that, it´s not music anymore, because music is feeling and not a sport, just like skateboarding is not a sport. Less is more!
What kind of deck, trucks, wheels, or other gear are you currently using?
I ride a Santa Cruz Dressen Serpiente 8.75 x 31.9 deck, 149 Independent Trucks, OJ Wheels, Mob Griptape, Independent bearings and Emerica Skate Shoes. 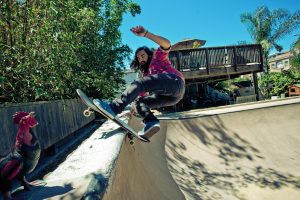 What other bands who have members who skate have you toured with and skated with?  Were you impressed?
We played with Denis Lyxzén the Singer of Refused in Berlin one night where he played with The (International) Noise Conspiracy and he is a skater and we talked a lot about skating. Funny enough, he was also sponsored and stopped because he lost the fun in it. Other than that, there´s always at least one skater in every band we play with.
The other day we were playing with Red Fang at this festival and they all skate. It´s funny when you meet skaters on tour because you recognize them immediately. They never complain about anything like the catering or the sound and that kind of stuff. They just take what is there and create something out of it so it works. Skaters will rule the world someday. They might actually already do.
Do you seek out skate shops on tour?  What are the best ones?
Sometimes. when I know there´s a good or legendary skateshop in town. Or if I know the people of the shop. We even went to a couple because we needed to fix some of our music-gear and we knew they´d have tools and be the kind of people who will actually help to fix it.
I don´t really have a favorite skate-shop but our local skate shop Zig Zag is pretty rad. They help us out all the time. We hang out with ´em, go ride our choppers around town and party with them when we´re in town.
What is the worst injury that you ever suffered skating and how did you recoup from that?   Did it affect your playing?
I ripped my ligaments once by doing a frontside 180 ollie over a gap into a steep bank at a local street spot. I had roll home while i was laying on my board. It must have looked so weird. Tortoise-style! Due to the good health care system in Germany, everything was fixed really fast and I have no problems with that stuff anymore.
Which of your band’s songs are the best to skate to?
Good question. We´re often thinking about that when we´re writing songs `would it sound good in a skate video` cause that´s how we got into music you know. I´d go for ´1000 years of doing nothing` cause it´s fast and energetic.  ´The Rabbit And The Wolf` is perfect if you need a good push to try something scary. ´These Bridges I Must Burn`, ´PCH Diamond` would be perfect for a cool session at your local skatepark especially in an evening session.
(A video for the album’s first single, “Your Kisses Burn Like Fire,” a sweaty, boot-stomping outing featuring a growling Grabke and a driving backbone via Mirtschink, premiered via Noisey earlier this summer. Check it out here: http://noisey.vice.com/blog/the-picturebooks-your-kisses-burn-like-fire-video.)