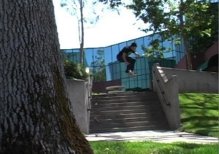 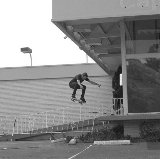 SEIZURES is a five-piece hardcore band from Orange County, CA whose sound can best be described as controlled chaos.  Pulling influence from late ’90s and early ’00s metallic hardcore and combining that with their own mathy, experimental twist a la Botch and Converge, they are a force to be reckoned with. Their live performances, often taking place in complete darkness, have been compared to those of The Dillinger Escape Plan and Every Time I Die.  After spending nearly a year in the studio with producer Erol “Rollie” Ulug (Graf Orlock; Bright Lights Studios), SEIZURES finally unleashed their second full-length, The Sanity Universal, on November 15. Released via Sun Terrace Recordings, The Sanity Universal is a tale of 13 different real life situations and the emotions that were felt throughout unique to each of the five members, from depression and fear to anxiety and torture.
Did we mention it is perfect for skating?  This is particularly appropriate as all members of the band skate.  Ghettoblaster caught up with SEIZURES’ Cameron Miller to discuss the sport as he prepares for a slot opening the sold-out American Nightmare, Hesitation Wounds show at Chain Reaction in Anaheim, CA on December 13.  This is what he said.
When did you begin skating and what is it about skating that continues to appeal to you?
I started skateboarding with my older neighbors when I was very young. I entered my first contest the day after my seventh birthday and I’ve been obsessed ever since. I find the creative aspect to be the most appealing. Marc Johnson said, “If you think of something, you can do it. Skateboarding = ideas that are put into action.” That thought process has always helped land tricks. I’m fascinated with the artistic freedom.
Do you play places on tour that also allow you to skate inside or outside? What are the best places you’ve skated on tour?
With Seizures, Unit B Studio in Santa Ana, CA has been the only place we have played with a skatepark. Unfortunately, I haven’t had time to skate on tour due to our long drives and weather conditions so far. But, I have an extensive list of places I would like to skate when we get back on the road. We actually talked about a Seizures tour/skate video last night.
What is the most difficult trick that you’ve landed? How does the feeling of landing that compare to the feeling of conquering a difficult riff or part in your music?
It’s tough to choose one. I frontside flipped a nine stair. I had never tried doing f/s flips down anything, but I was convinced I could do it. After about 20 bad falls, I finally landed it. I can only compare landing a difficult trick to recording our new record. Our style has changed since our previous recordings and the new songs are more technical and challenging. So when we finally finished the record, I guess it was like landing a difficult trick. Bolts.
What kind of deck, trucks, wheels, or other gear are you currently using?
Andrew Reynolds Baker (Wazzup Deck)  8.1″, Independent trucks, Spitfire Classics 54mm, Diamond hardware, Black magic griptape and Bones Reds bearings.
What other bands who have members who skate have you toured with and skated with? Were you impressed?
I have yet to really skate with anyone else or see anyone else skate. But I would like to skate with Jason Butler of letlive. soon.
Do you seek out skate shops on tour? What are the best ones?
I haven’t had the opportunity yet. I have list of spots, parks and shops that I plan to visit someday on the road.
What is the worst injury that you ever suffered skating and how did you recoup from that? Did it affect your playing?
I tried to board slide a local 17 stair handrail, which resulted in a compound fracture to my heel. My board stuck to the rail and I was thrown to the bottom feet first. It took six months to recover from that. I haven’t had a serious skateboard related injury since playing with my band.
Which of your band’s songs are the best to skate to?
“Dreamsnake” would be my immediate choice. But all of us skate, so every Seizures song.
(Peep Miller’s skills here:
)