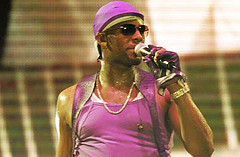 Ladies and gentlemen, there is a man who is named Robert Kelly who is the greatest rhythm and blues singer of all time. I’m sure many of you have heard of him, and heard his claims to the title as well, but I’ve yet to hear anyone dispute his title. Let him remind you that he is the king of R and B. But that’s not a title easily earned, without pain, hardship, and some actually borderline psychotic presence of an ego that puts him in the “slightly schizophrenic” section of the universe.
Let’s focus, then, on his latest album, one that he was too lazy to name: Untitled. A few of the songs were slated for Twelve Play Fourth Quarter, the fourth album in his Twelve Play series, but when the album was scrapped, Kelly wrote a bunch of new hits and titled the album, well, Untitled. But let’s not let this be disheartening.
Since his inception, R. Kelly has built his career on a few different sub-genres of soul/r&b music: slow jams, club hits, inspirational gospel music, and ballads. His breakout album, 12Play, was a collection of the first: slow jams designed to inform the listener that he had twelve ways to pleasure a woman, featuring a song titled “I Like the Crotch On You.” From there on, he branched out, leaving us last with Double Up, a slightly bloated magnum opus that would have otherwise been one of the best albums of all time.
Despite a few clunkers with Nelly and Chamillionaire, we’ve got excellent narrative songs like “Same Girl” with Usher and “My Best Friend,” featuring Keyshia Cole Polow Da Don. Besides those, we’ve got the one-sided phone conversation YouTube sensation “Real Talk” and the super catchy club hits “I’m a Flirt,” preceded by the two best metaphorical slow jams with “Leave Your Name” and “The Zoo.”
So where does that leave us? The man is recently divorced, cleared of charges, and had a miniature breakdown about his fourth album in a series — he’s ready to let it all out.
One of Robert’s strengths has always been his ability to work very closely with extended metaphor, as well as his command of rhythm and melody. Well, metaphor is out the window on Untitled. We start the album with a song about having a great time, moving into a proposition to leave the club with him, and then a tune about having sex all day and all night long. Then we have two songs deeply devoted to performing oral sex on a lady, and we even have a song later on where R. Kelly flat out tells the girl that she can’t be his girlfriend or wife because he already has a special girl, but that he invites her to be his number two (“Be My #2”). Poop jokes aside, Kells isn’t playing around on Untitled. We are treated, however, to “Number One,” a comparison of having sex being like recording a number one hit single. This isn’t really metaphor though, since the song is mostly about them explicitly having sex, and the radio references don’t go far past the radio announcer dropping in on the chorus to proclaim “THIS IS NUMBER ONE.”
Still, this is undoubtedly a classic R. Kelly album, as the man always has his hands on the mixing board in the studio, and his trademark vocal lines and unconventionally rhythmic beats are as strong as they’ve ever been. The best example of this is “Exit,” a song with a plunking piano walk that dominates the melody. But while he follows it when it pops in and out, Kells lets his main vocal lines hop octaves in a technical vocal trapeze act. The quality of the music is at it’s peak: Kelly has never put out an album this tight in melody and production.
But is that what this column is really about?
Nope. We want to address how a man so skilled can be so batshit insane. The Gray Area we’re going to explore is in between the tribute to the Virgina Tech shootings on Double Up called “Rise Up” and the song simply titled “Bangin’ the Headboard” from Untitled. Or maybe how the man who recorded “I Believe I Can Fly” went on to previously mentioned “Be My #2.”
No matter what the subject of his music, there’s no doubt in anyone’s mind that R. Kelly is one hundred percent committed and serious about every song he’s ever recorded. How is this possible? Doesn’t anybody have a filter that keeps them from going all the way off the deep end?
“Hold on, Robert — maybe not everybody would appreciate the fact that you’re telling them that you would never date them but would enjoy their company as a mistress. You should reconsider the song concept, even though it does represent your honest desires, and maybe find something more respectful of women and commercially viable.”
Nope, doesn’t exist. And that’s why R. Kelly is the only honest true artist out in the world today. He’s never secretive or repressed. He ends “Be My #2” with a chorus of “All you hatin’ motherfuckers” before repeating the word “slap” about three or four times. How does this man sit in the recording studio and say “You know what? I’m going to call out those haters and then let them know that I would slap them” and have the co-producer or engineer think, “Yeah, that’s the way to end the song.”
Who knows? Maybe you just don’t argue with R. Kelly. But at least the American public knows what we’re getting into, and there’s no sense that we’ve been led down the rabbit hole dishonestly.
Gray Area Score: Is Patron gray? I know he sings about it a lot. I think maybe it’s silver. Oh well.
Original photo by Andrew Steinmetz