Gray Area: the place where Black Metal and White Light/White Heat come together. 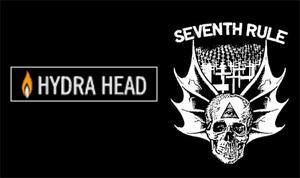 These guys are pretty great.

When I first conceived this column, I didn’t have Venom or the Velvet Underground in mind. But both bands sort of staked out new territory that their peers weren’t quite sonically keen to, and ultimately, the new Gray Area is the space between metal and hardcore that can’t quite be musically defined. That was the original idea for the column, and television and movies quickly fell in line as well.
When talking about the Gray Area of music, two labels that stand out are Seventh Rule and Hydra Head. Both labels were founded in the Great American independent tradition, by folks who loved music, and might just need an outlet for their future material. And while Hydra Head has really come into it’s own these past few years as one of the ultimate frontrunners in metal music, Seventh Rule has been rising steadily from a part-time Chicago based label to the signing of Kongh, the label’s first international band, out of Sweden. Fitting, then, that Kongh’s debut should coincide with that of Harvey Milk on Hydra Head. Both albums pull from doom metal and sludge in entirely different ways, and I couldn’t think of two better bands from two better labels in which to write about for this week.

Kongh’s Shadows of the Shapeless has slight melodic inclinations while delving heavily into repetitive drone tendencies and death metal vocals. Harvey Milk’s self-titled album plays like an absurdist version of early Melvins (I know, I know) who spent a lot of time listening to Saint Vitus. Both albums are unmistakably steeped in metal tradition while forming new boundaries and spanning the gap between different subgenres, but the important part here is that both bands are operating with what are essentially very small, independent record labels. No matter how brutal a metal band is, one of the boons of heavy metal music is a lack of scene politics that frowns on major label jumping.
Take High On Fire or Mastodon for example. Both rode Relapse until High On Fire jumped to KOCH (okay, technically an indie) and Mastodon hit it big with Warner.  In terms of metal hierarchy, both groups were at the top of their game as far as straight heavy metal bands go, and didn’t need the major label promotions to back their music. The move was sheerly financial, which, in the end, whatever.
But Kongh and Harvey Milk are riding it out the way Dead Kennedys and Black Flag and Minor Threat did it at the beginning of the 80s. It’s hard to see a major label interested in Kongh’s transitions from punishing metal riffs into their more melodic ambient passages, or Harvey Milk’s impossible-to-frame absurdism. The second song on the album, “Plastic Eggs,” starts with nearly two minutes of guitar drone before launching into extremely loose sludge. Kongh’s “Essence Asunder” begins with three minutes of ambient, jazz influenced melodic rock before launching into bone crushing drop tuned riffing that carries the song into more transitions for a total of fifteen minutes.
Both albums are awe-inspiring in their originality and their cross pollination of metal ideas. Both labels are run by dudes who came up loving hardcore and metal, and their hard work has given an outlet for some of the greatest music being made right now.
So maybe we’re heading into a Golden Age of Metal right now. I guess that would be pretty sweet.