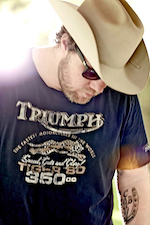 The Warden released his debut solo album on October 9, 2015 via Dallas, Texas indie label, Idol Records.
Now, you’re probably asking yourself, “who is The Warden?”  He is East Dallas, Texas resident musician Ward Richmond, a fixture on the local scene who has toured internationally with projects such as Slick 57 and Boys Named Sue, among others, where he’s held down the bass, songwriting, management duties, and sometimes vocals of these local music legends.  This time, though, he’s picking up the guitar and making all of the decisions by himself.
While still an active member of Dallas’ country outfit Boys Named Sue (voted “Best Country Band” in Dallas, Texas – 2005, 2006, 2007, 2010), he ended up writing a handful of songs on his own, inspired by the birth of his daughter, Betty Sue, and recorded them with just his acoustic guitar on his iPhone.  Eventually, he handed his tunes over to his longtime friend, and musical cohort, Robert Jason Vandygriff (from notable Dallas bands The Von Ehrics and RJV & Hell County Revival), and Jason talked him in to making a solo record.
After about a week and a half of recording, at the legendary Echo Lab in Argyle, Texas (where Old 97’s, Centromatic, Polyphonic Spree, and Slobberbone have worked), magic happened.
Self-described as “East Dallas honky tonk,” the record mixes foot-stompin’ honky tonk and authentic, Texas-style storytelling with a slight dash of Southern punk rock, resulting in a countrified memoir looking back over the past fifteen years of The Warden’s life, presenting tales of lifelong friendships, falling in and out of love, and the wild-ass adventure that happened along the way.
In addition to Vandygriff producing the record, and Echo Lab’s Dave Willingham behind the boards, he enlisted the help of a blistering honky tonk orchestra made up of his friends (not to mention, some of the best damned talent the State of Texas has to offer), including Chad Stockslager (The Drams, The King Bucks, Hard Nights Day), Bruce Alford (Jack Ingram, 1100 Springs, Stoney LaRue), Dan Phillips (True Widow, Slowride, Reverend Horton Heat), and Burton Lee (1100 Springs, Mike & The Moonpies).  He also convinced local stalwarts Madison King, Leslie McDonel (American Idiot), and John Pedigo (Slick 57, Boys Named Sue, The O’s) to join him in the studio.
One thing is for sure; after listening to The Warden, you will want to live vicariously through the album again and give it another spin.  Sit down and have a beer with The Warden and you’ll likely hear tales about opening for Waylon Jennings, sneaking onto Willie Nelson’s tour bus, and joining Billy Joe Shaver onstage to sing “Honky Tonk Heroes.”
A true Texan, proudly born and raised in East Dallas (The EDT), this debut album is a testament to the fact that The Warden works hard each day at the art of livin’ life properly.
Ghettoblaster had the pleasure to speak with Warden about the record recently:
When did you begin writing the material for your most recent album?
Mainly in the Summer of 2014.  But, I revisited a few oldies as well which date back to the early aughts.
What was the most difficult song to take from the initial writing stage through recording and mixing?  Why was it so troublesome?
I’d say “Bullets,” because we had to change the vibe from a balls-to-the-wall punk rocker to a lovely ballad.
Which of the songs on the record is most different from your original concept for the song?
“Bullets.”  See above.
Did you have any guest musicians play or sing on the record?
Yeah!  A ton.  They are all absolute rippers and I look up to all of them for their insane level of talent.  Not to mention, they are all great friends.  Read the liner notes and everyone deserves a high five or maybe a double.
Who produced the record?  What input did that person have that changed the face of the record?
Robert Jason Vandygriff produced it and talked me into doing it.  He also ran point on converting a bunch of beat-up songs into something I find to be very special.
Is there an overarching concept behind your new album that ties the record together?
I’d say it’s about the life of a wild-ass rambler who might be ready to chill out a little bit.
Have you begun playing these songs live and which songs have elicited the strongest reaction from your fans?
We are playing our first show in Dallas on November 11th and we will find out what the people think.  I hope they think it’s cool and relatable and the music is 150% ass-kicking, from the honky tonk warlords of East Dallas Texas.
Ghettoblaster also has the pleasure of sharing “Country Line,” which you can enjoy below: