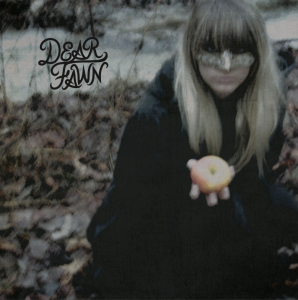 I Played The Queen EP

Dear Fawn have been building a solid reputation in their hometown of Dayton, Ohio by playing spirited live shows which display their allegiance to rock n’ roll and quirky musical experimentation. Consisting of singer/keyboardist Tifani Tanaka, guitarist/keyboardist Tyler Bellingar, bassist/guitarist Kyle Melton and drummer Andy Smith, the band spent the latter half of 2012 recording songs for their debut EP, titled I Played the Queen, which will drop via Gas Daddy Go! Records on April 13.
Ghettoblaster caught up with Tanaka and Melton to discuss the EP.  This is what they told us about it…
When did you begin writing the material for your most recent album?
I’ve been writing some of the lyrics for years now, but it wasn’t until last winter that they became fully developed. The melodies have changed quite a bit to fit the music, but the foundation is still there. –Tifani Tanaka
Tifani and I started working together putting music to her words last February/March. It was a very tedious process initially, as I was tracking one instrument at a time on each song. It was my first attempt at trying to play everything on a song, but I enjoyed the process. The two of us worked up demo versions of three of the songs before Tyler and Andy started playing with us last April. There were another few songs that we worked on as well that kinda got pushed aside before we started working on the album. –Kyle Melton
What was the most difficult song to take from the initial writing stage through recording and mixing? Why was it so troublesome?
I would say “Not in the Lion-Hearted Room” was the most difficult. It seems to be a fan favorite so I wanted it to be the best. Our early demo had a much different key tone, which I feel in love with but it was much slower and I didn’t feel that I showed enough emotion through my vocals. Our EP version is much more polished but I’m still having trouble accepting that it’s not “perfect” in my eyes. -TT
Which of the songs on the record is most different from your original concept for the song?
Kyle and I had originally written an entire different version of “The Bad Seed”. It had a very “country circus” sound to it. It was pretty and airy with a lot of bass. One day Andy and Tyler where screwing around during practice and came up with a very loud and dynamic sound and I couldn’t help but throw “The Bad Seed’s” lyrics over it. It sounded much more cohesive with our other songs and turned out to be one of our favorites. -TT
Did you have any guest musicians play or sing on the record? After recording “There are Tigers in the Basement” we knew we needed to add bass to the song to make it complete. After a while of fighting over who got to write the part, Tyler handed the bass over to our producer John Lakes and told him to do what he could. After only hearing the song a few times himself, he came up with the perfect bass part that changes the entire mood of the song. We couldn’t be happier with the outcome. -TT
Who produced the record? What input did that person have that changed the face of the record?
John Lakes recorded the album, but it we all really produced it together. After having spent a good deal of time last spring working on demos for several of the songs, we had a pretty clear idea of what the tracks should sound like. The recording and mixing of the album was pretty collaborative and having someone as seasoned as John at the helm certainly helped in creating a good sound and he definitely offered up some great ideas, even stepping in and playing bass on “Tigers,” but for the most part he was extremely gracious in allowing us to chase our ideas and translating them. The end result is something I think we’re all quite proud of. -KM
Is there an overarching concept behind your new album that ties the record together?
When we first started playing we had so many ideas and we couldn’t help but try them all. Our EP is very erratic. Each song sounds much different from the next. Since writing these songs we have a much more unified sound, but we felt it was important to show what all we are capable of. Our next record will have a much better flow but these songs were our babies and we just couldn’t leave them behind because they didn’t fit into our now more consistent sound. -TT
Have you begun playing these songs live and which songs have elicited the strongest reaction from your fans?
Everyone tends to sing along to “Not in the Lion-Hearted Room.” It’s very dark and the lyrics are very depressing but everyone seems to love it! They also seem to enjoy dancing around to “I Played the Queen” and “White Russians.” We have the most amazingly dedicated fans who make every show so much more worth playing. The support we’ve been shown throughout our journey so far has been the best part of the entire experience for me. I feel like one very lucky lady with some very amazing boys by my side. -TT
(Check out the band online here:
http://gasdaddygo.bandcamp.com/album/gdg-008-i-played-the-queen-cd
http://www.facebook.com/dearfawns)