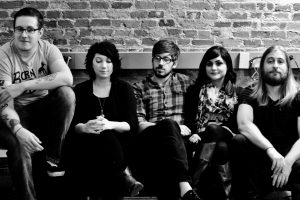 In 2012, Tifani Tanaka of Dear Fawn collaborated with her friends for the release of, I Played the Queen. The EP was a lo-fi throwback to when lyrics played an important part of music before style superseded substance. The EP featured surf soaked guitars, stripped down drums, and an urgency in thevocals that quickly made waves in the Dayton, Ohio, music scene. After a recording session with John Lakes, the EP was released in the spring of 2013 by Gas Daddy Go Records.
After some heavy contemplation, the line up changed to suit Tanaka’s ever evolving vision. Her idea involved expanding the scope of her lyrics by using sparse instrumentation meshed with ethereal guitars, hollow drums and simplistic keys. Dear Fawn’s music now ranges from background music fit for Grimm Fairy Tales to lullabies with heartbreaking themes of unrequited love.
The band released the EP You’re Never Coming Back in early December of 2014. A digital self-release of five songs, this recording is a sample of what is to come. Quiet and considerate at first, then driven and focused through the end. This effort will be followed up with a new recording by the fall of 2015.
Today Ghettoblaster has the pleasure of sharing “You’re Never Coming Back.” Enjoy: