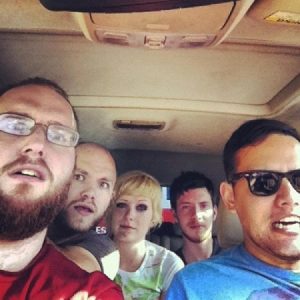 Debut albums are a tough lot. Sometimes bands who’ve self-released a few EPs try to crank out (and, in effect, stretch out) more of the same formula that came before, somehow hoping for a different result or even recapturing the magic of their first recordings. Others aim for cookie-cutter hits, and still more experiment a bit in an attempt to stand out.
Chicago’s The Flips have been generating a tremendous buzz since the release of their Damn You & Damn Me Too EP, and with the A Harm Deep But Shining LP the band are more caustic and harmonious than ever.  Quiet/loud dynamics burst into audio explosions, and vocalist guitarist Nick Sintos tempers punk agitation with memorable harmonies.  The young, but confident quintet emerges with a sound fit for fans of Foo Fighters, Say Anything and Manchester Orchestra.
Ghettoblaster recently caught up with Sintos to discuss the full-length album, which dropped in November 2013.  This is what he said about the writing and recording process.
When did you begin writing the material for your album?
We began writing for our full length album A Harm Deep But Shining immediately after we recorded our first EP Damn You & Damn Me, Too. It was pretty instant. As soon as the EP was pressed, I began writing new material instantly.
What was the most difficult song to take from the initial writing stage through recording and mixing?  Why was it so troublesome?
I would have to say “Casino” was the hardest to finish in the writing stage.  That sounds awful to say, because when you listen to it, it sounds so simple with the same chords over and over.  The problem with playing the same chords for the verses/choruses/interludes you sort of get lost in the structure.  So the key to that song had to be rely on dynamics mostly, and when to play soft and when to go all out.
Which of the songs on the record is most different from your original concept for the song?
Well, most of the songs I write begin on the acoustic guitar. Or, we will maybe jam on a guitar riff or a chord progression initially, and I’ll go back to the acoustic guitar. I will come to the band with a pretty complete song.  I tend to have an idea as to how it should sound full band in my head, and everyone usually gets there without me even saying anything, So all that being said, the song “Racing Stripe” would have been the most different. I brought it to the band, and we started to really make it into a full band song. Then on another day  when I wanted to practice it with them, I was accidentally playing it in the wrong time signature, but half way through the song I realized what I did and switched back. For the longest time, I couldn’t wrap my brain around it, but we ended up recording it that way.
Did you have any guest musicians play or sing on the record?
Nope.
Who engineered, recorded, mixed and/or produced the record?  What input did those people have that changed the face of the record?
We tracked the record with Alex “Excel” Cruise and Mike “Rocka” Gamon from The Jungle working as engineers in Chicago. They were really great for putting up with my bad playing. It takes me a while to get comfortable in the studio, and those guys were very efficient in their jobs as to not have me wasted time and money.  Adam Instefjord from the band Lights Alive (Chicago) mixed our record.  We consider him a good friend, so we really valued his opinion. He knew what we wanted in terms of the album not sounding TOO overproduced, yet just polished enough.  I was able to learn a lot from him as far as how mixing works.
Is there an overarching concept behind your new album that ties the record together?
This record is about going from my early 20s to my late 20s and really having to “grow up”. Dealing with the person you used to be, and the person you are becoming, and the person you want to be. Struggles with my faith is also common throughout the record. I just waited to make an honest and sincere album.
Have you begun playing these songs live and which songs have elicited the strongest reaction from your fans?
Yes, we’ve been playing some of these songs live for a while now.  “Casino” seems to be the fan favorite live. Even if a show hasn’t seemed to be going our way in terms of a fan reaction, once we get to “Casino”, people start paying attention. That’s become our closer at shows. It’s big and mean and I just love how it ends so abruptly and we all look like insane people on stage.   It’s a great “fuck yeah exclamation point” at the end of a night.
(Here is a live performance from a recent Chicago show at the Beat Kitchen:
http://www.youtube.com/watch?v=cd00a1azY0Q
Visit them online here:
facebook / twitter / bandcamp / youtube)