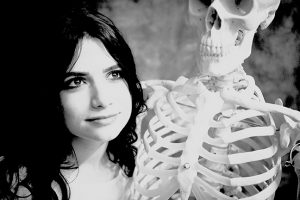 Thayer Sarrano is forging her own path into a southern-psych-dreamland, bottling up ghosts and bringing them to life through her ethereal desert rock hymns. The tones tremble and bend, layered in swirling atmospherics. The angelic voice will pull you in close to share devastatingly beautiful and heartbreaking secrets, while shadowy figures dance in the background. This is music that envelops the listener and may transport you to another world or time, melancholic and haunting, yet bursting with heavenly light.
With her latest release, Shaky, the multi-instrumentalist sounds more than ever like her roots, her places of origin. She grew up in a monastery, and the swamplands of coastal southern Georgia. Classically trained as a child, she always wrote instrumental compositions and poetry, even at a very young age. With chanting forever embedded in her subconscious, she awakened further, now to grunge of the 1990s. Songwriting came when she landed in the vibrant musical community of Athens, GA – where she is now based.
She began to collaborate with friends, forming her own band, while establishing herself as a studio/touring session player. She has worked with Cracker, Camper Van Beethoven, T. Hardy Morris, of Montreal, Dave Marr, and David Barbe, among numerous others.
Shaky sees release via Guildwater Group on August 28, and Ghettoblaster Magazine caught up with her to chat about it. This is what she said.
When did you begin writing the material for Shaky?
January 2013 mostly, and finished that winter.
Which of the songs on the LP is most different from your original concept for the song?
“A Quiet State of Panic.” I wrote it on piano in this saloon style. I like to play, but I knew it wasn’t how I wanted the music to be for the song. Andy Lemaster came up with the instrumentation, and I added melodica at the last minute.
Your bio states this is your bravest and most vulnerable record. Does that suggest that this is more of an autobiographical record?
Yeah, it was a hard record to make, but I had to finish it.
You recently had a show, in your hometown of Athens, at a Chapel. How did that come about? Is it a special place for you? I always want to play in chapels, and I’ve always wanted to play at the Seney-Stovall chapel in Athens with my band. I saw videos of R.E.M. and I got to play there years ago with Dave Marr and the Futurebirds.  It is still one of my favorite nights in Athens. For the home album release show it seemed perfect, and we can have our art and light installation and enjoy the special space with our friends.
Speaking of Athens, how was the scene helped your career? It seems to be a very altruistic community of musicians down there.