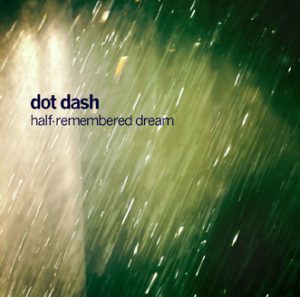 Washington D.C.’s Dot Dash, a band that features ex-members of Julie Ocean, The Saturday People (Slumberland label), Swervedriver (Creation), and Youth Brigade (Dischord) are set to release their third album in less than two years.
The 10-track Half-Remembered Dream, out this month, was preceded by Winter Garden Light (released in September 2012) and spark>flame>ember>ash (released in September 2011) – all on The Beautiful Music, the Ottawa, Canada-based indie label that has been issuing underground pop records for more than 10 years.
As before, there’s a persistent thread of melancholy running through Dot Dash’s ringing, intense, melodic pop, but it takes on a variety of forms. Amidst jangling, wistful guitars — contrasted by often thunderous bass and drums — Half-Remembered Dream is, by turns, energetic, plaintive, and punky.
Ghettoblaster recently caught up with Terry Banks, the band’s vocalist/guitarist to discuss the new album.  This is what he said.
When did you begin writing the material for your most recent album?
Pretty much right after we finished making our second record, Winter Garden Light, which came out (also on The Beautiful Music) this time last year — that’s kind of the ‘cycle’ we’re on, i.e., getting a record out in the late-summer, then start writing new songs and doing them live over the course of the next 9 or 10 months, then, when he have 10 or so songs that we feel really excited about (which is not the necessarily the first 10, as a couple may get discarded along the way) making a new record.  So, we’re starting on new songs now for what will (if the stars are aligned) be our fourth album.
What was the most difficult song to take from the initial writing stage through recording and mixing?  Why was it so troublesome?
To be honest, they all went pretty easily… Although we try to sound as ‘pro’ and together as we can, mostly we just follow our instincts.  However, on “A Light In The Distance,” (http://dotdashdc.bandcamp.com/track/a-light-in-the-distance) we, without realizing it at the time, played half a measure too long on the second verse.  When it came time to do the vocals, there was this unanticipated empty space at the end of the second verse.  It wasn’t as easy as just starting singing later to fill it up, as the rhythm is sort of weird.  So… I ended up doing this kind of blood-curdling howl/scream thing to get to the end of the measure.   It sounds kind of cool.
Which of the songs on the record is most different from your original concept for the song?

Hmmm… they all pretty much turned out as hoped/envisioned.  There are some interesting, echo-y effects on the guitars at the end of ‘Bloom/Decay’ and ‘Fiction Section’ and kind of a nice little jangly, arpeggiated guitar break in the middle of ‘Do Re Mi’ that were all added at the end, so maybe those…
Did you have any guest musicians play or sing on the record?

Nope — just the four of us:  Terry (guitar/voice), Bill (guitar), Hunter (bass) and Danny (drums.)
Who produced the record?  What input did that person have that changed the face of the record?

Branden Funkhouser, who also produced our second album.   He was great — had some good ideas about guitar sounds, not rushing things, and just, in general, making things sound nice…
Is there an overarching concept behind your new album that ties the record together?

Not really.  There are certain thematic things I often tend to circle around lyrically but no specific ‘concepts.’   Concept albums need to be about elves and sorcerers and that kind of stuff…
Have you begun playing these songs live and which songs have elicited the strongest reaction from your fans?

Yeah, we’ve played all of these songs in gigs lots of times.  People go nuts: uncontrollable sobbing, stumbling around with glassy eyes staring off into the middle distance, speaking in tongues — oh wait, that’s us.  Ummm…  Let’s see, people seem to dig ‘Bloom/Decay’ and ‘(Here’s to) The Ghosts of The Past’ a fair bit.
(Check out the band here:
Band info:  https://www.facebook.com/dotdashdc
CDs available via the label at:  http://thebeautifulmusic.com/
Full streams of new album:  http://dotdashdc.bandcamp.com/
Downloads also via iTunes, Amazon, eMusic.)