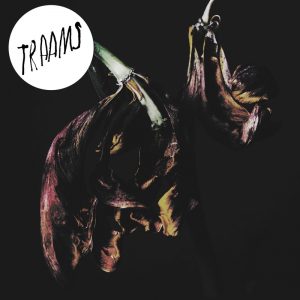 TRAAMS formed in summer 2011 in Chichester, West Sussex, meeting at a club night that vocalist and guitarist Stu Hopkins started as a reaction to the city’s limited nightlife. The only options previously available to him and his friends were “boring clubs and bars which only played boring club music”. That same restlessness can be heard in the propulsive rhythms that form the backbone of TRAAMS’ noisy, joyous krautrock squall. There’s a tellingly urgent way that Hopkins delivers his lyrics; frustration is obviously a familiar and shared sentiment for the trio and, as Grins, their debut LP for FatCat, showcases.
Having already shared stages with contemporaries such as Parquet Courts, Dope Body and FIDLAR, and wowed audiences at Talinn Music Week in Estonia, TRAAMS are rapidly leaving the sleepiness of their hometown behind and hurtling towards an exciting future.
Ghettoblaster recently caught up with Hopkins as the band prepares to release Grin on September 24 via FatCat.  This is what he said about it…
When did you begin writing the material for your most recent album?
We pretty much started straight away. The way we write tends to be us all being in a room together bashing through ideas we’ve each brought in, we tend to get the most out of them like that. Songs that start with one us can be finished by the others two and vice versa. At the start we never realized we were writing a album we were just getting tracks together to put online and stuff. We’ve been pretty economical though. We rarely scrap songs.
What was the most difficult song to take from the initial writing stage through recording and mixing? Why was it so troublesome?
“Ladders” from the EP of the same name was probably the most difficult just because the lyrics took ages to do. Not sure why just had a bit of a block with that one. Most of the other songs were pretty organic, we try as a band not to over think stuff or dwell on tracks. Spontaneity is pretty important.
Which of the songs on the record is most different from your original concept for the song?
“Hands” is really differen. It started in a weird time signature and was sort of mathy and odd. It wasn’t really working so we stripped it to its bare bones and rebuilt it. It’s now arguably the simplest track on the album.
Who produced the record? What input did that person have that changed the face of the record?
Rory Attwell and Matthew Johnson.
Rory we contacted early on because we were into a load of the bands he’d already recorded , he seemed to have a attitude towards recording that suited our music and tastes. He’s pretty hands off, Very quick and all about capturing stuff live, in one or two takes. He’s a top lad.
Matt we got introduced to and was a great, we went up to Leeds to his studio and hung out for a week. Matt’s got a real ear for sonics and he definitely suggested some more extreme recording ideas. On “Ladders” for instance he had me playing feedback on a twelve string electric for 10 minutes with a Big Muff through a Fender Twin both on ten. It was SO fucking loud.
Did you have any guest musicians play or sing on the record?
Nope, MJ and Rory (who produced the tracks) played some keyboards and a melodica on some tracks but that’s it.
Is there an overarching concept behind your new album that ties the record together?
Not so much a concept but there’s definitely reoccurring themes in the lyrics etc. It all written in the same time period so it definitely has a cohesion. The title Grin seemed to sum up the album themes pretty well. It’s quite a positive word but with sinister undertones. That made sense to us.
Have you begun playing these songs live and which songs have elicited the strongest reaction from your fans?
Yeah lots. We’re very much a live band and have played pretty much all the tracks at some point. “Flowers” always goes down well, people remember the chorus. “Low” is fun. “Grin” gets people dancing. “Head Roll” is ace when it hits the extended bridge section because we all just lock into a groove and you can see the audience gradually get locked in with you. “Klaus” tends to leave everyone slightly deaf — it’s pretty loud live.