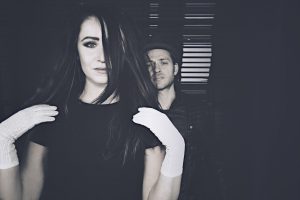 Ugly Kids Club is made up of bright, yet haunting vocalist, Aliegh Shields, and Grammy-nominated rock producer, Steve Wilson. Experimenting with all the little sounds they love, from whimsical soundscapes to lush ’80s synths, the Nashville-based duo crafts electro-pop driven tunes for ultimate enjoyment. Think pop-grunge band formed by Madonna, Andy Warhol and M83.
The pair formed in 2011 over their love for minimalist rock duos like Sleigh Bells, Crystal Castles and The Kills. At the time, Steve was producing projects such as The Juliana Theory and Jonezetta, while writing, producing and playing in his own bands, The Class of ‘98 (The Militia Group) and Hether (Interscope Records). Aliegh, who was fresh out of high school and new to Nashville, was a guitar playing songstress with a solo development deal of her own. Already acquainted through Aliegh’s brother, Wilson came on to produce her solo tracks. In no time at all, the two uncovered a mutual desire to form a band and switched gears to create Ugly Kids Club. They were able to grab ahold of their own sound that encompassed a move toward the electronic pop genre while still paying tribute to their rock influences.
Ugly Kids Club release Head Games tomorrow and Ghettoblaster caught up with Shields and Wilson to discuss it. This is what they told us.
When did you begin writing the material for your forthcoming EP?
Steve Wilson: We started writing the tunes that are on our forthcoming EP earlier this year, and some at the end of 2013. It comes out on September 30.
What was the most difficult song to take from the initial writing stage through recording and mixing?  Why was it so troublesome?
SW: “Head Games” was the most challenging because it went through several developmental stages before we arrived at the final version.  The chorus came fast and never changed, but the verses were more difficult.   Originally the verses were sung through a talkbox.  Then the talkbox became just a feature on the bridge.  We also rewrote the lyrics several times for the verses, and we eventually landed on Aliegh singing the verses.
Aliegh Shields: I definitely agree with Steve on “Head Games.” It started out as an entirely different song. It was painful and at times we couldn’t let go of where it first started.  I’m really glad we pushed on. Once we figured out the right direction to go, it turned into my favorite song off of the EP.
Which of the songs on the record is most different from your original concept for the song?
SW: I think for me, “Good Love” became the most different from how I originally heard it in my head.  I heard it more as a synth driven indie rock track but then then song pulled us in a ‘poppier’ direction all on its own through the writing and then production/mixing process. It surprised me how fun it was to go there.
AS: I also think “No Saving Us” turned out a lot different then we expected. It was written as a slow minimalist ballad with a piano and smaller tracked mind. The more we got into it the more we realized how big of a song it wanted to be.
Did you have any guest musicians play or sing on the record?
SW:  Our friend Luke Foley, of the band Farewell Flight, joined us on the choir part on “No Saving Us.” The rest is all us.
Who produced the record?  What input did that person have that changed the face of the record?

SW:  I produced the record.  I guess I can’t speak for myself here, but since you asked…ha. I am very proud of the production, and I think this was a big jump forward for me toward where I hope to keep going and growing as a producer in the future.
AS:  Let me just say that Steve had a TON of influence on this record. We work really, really well together; so we end up pushing each other in ways that are scary but necessary. Steve’s knowledge of all things music really puts our music on a more professional level. Don’t know where I’d be without him!
Is there an overarching concept behind your new album that ties the record together?
SW: We did have a pseudo-concept in mind; we wanted the EP to follow the arc of a relationship that eventually doesn’t really work out.  It starts out with the butterflies and excitement of a new relationship (“Good Love”) moving to the physical attraction and sexual tension (“I Wanna Be Bad”), then to fighting through the reality that the relationship is dying (“No Saving Us”). Then to the painful process of growing apart from someone who was once the most important person in your life, but whom you no longer understand (“Head Games”).
Have you begun playing these songs live and which songs have elicited the strongest reaction from your fans?
SW: We have been rehearing these songs and are set to start playing them out soon.
AS: “My Soul” (from our last EP) has had the best reaction, especially live. Hopefully, with these new songs we’ll have the same, or an even better connection with our fans through the new tunes!  As Steve said, we start playing soon.
(Visit Ugly Kids Club here: http://www.uglykidsclub.com/.)