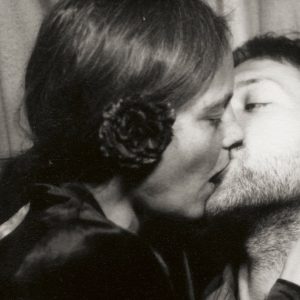 It’s Up To Emma

Over the course of 46 minutes and nine songs, Scout (Emma “Scout”) Niblett’s It’s Up To Emma the singer/songwriter simmers, storms and cascades through an a linear tale of domestic emotional crises, all of which are immaculately rendered in her distinctive style, which has been honed over 12 years of releases for Secretly Canadian, Too Pure and, more recently, Drag City.
From the get go, it seemed inevitable that wherever this record was made it was not going to follow the simple and usual process of old, where Scout and her drummer went in to play the songs live to tape in just a handful of days. With no sense of a partner in crime to back her up, it was time to rally the troops, with a total of three drummer friends taking turns to help stir the pot. The record started to evolve, but together with spit starts and unlucky luck, everything took a really long time and beyond the performances from a handful of talented players, there wasn’t anyone around who could help Scout finish the record in the way that was needed. In the end, it was truly up to Emma to get the job done, at home, alone.
Ghettoblaster caught up while in the midst of a tour supporting the late-May release of the record to discuss it.  This is what she said about it…
When did you begin writing the material for your most recent LP?
Well, one song is over 10 years old, but all the other songs were starting to come together from the summer of 2011 through to February 2012.
What was the most difficult song to take from the initial writing stage through recording and mixing?  Why was it so troublesome?
All the songs with strings on them were the most difficult, mainly because it took me a long time to find string players that actually could play the parts. I tried a few different people in Portland and no one nailed it. So I ended up asking some friends in New York to record them.|
Which of the songs on the record is most different from your original concept for the song?
I think “what can i do?”…mainly because initially there were no drums in my original idea for the song, and also the guitar solo in the middle was something I worked on at home months after the main body of the song was recorded.  So that song really evolved through different stages over months.
Did you have any guest musicians play or sing on the record?
Emil Amos (from Om, Grails) sings backing vocals on two: “no scrubs”  and “all night long”, and plays drums on five of the songs. Jose Medeles (1939 Ensemble and The Breeders) plays drums on “gun” and “woman and man”. And the strings were played by Danni Bensi and Saunder Jurrians of “Lapdog of Satan.
Who produced the record?  What input did that person have that changed the face of the record?
I produced this album. We worked with two engineers in Portland. Jason Powers and Brandon Eggleston. But I ended up mixing the record at home.
Is there an overarching concept behind your new album that ties the record together?
It’s a break up record.
Have you begun playing these songs live and which songs have elicited the strongest reaction from your fans?
Yes, I’m on tour now in Europe and all the new songs seem to be going down well. But the audience really seems to respond best to “gun” and “what can i do?” and “could this possibly be?”
(See Scout Niblett on tour at one of these dates:
6/12 Vienna, Austria – Chelsea
6/13 Graz, Austria – Postgarage
6/14 Innsbruck, Austria – Die Backerei
6/15 Luzern, Switzerland – B Sides Festival
6/17 Lille, France – La Peniche
6/18 London, United Kingdom – Corsica Studios
6/19 Cardiff, United Kingdom – Buffalo Bar
6/20 Leeds, United Kingdom – Brudenell Social Club
6/21 Glasgow, United Kingdom – Broadcast
6/22 Brighton, United Kingdom – Sticky Mile’s
6/24 Jena, Germany – Café Wagner
6/26 Stockholm, Sweden – Lilla Hotellbaren
6/27 Oslo, Norway – Gut Feelings Festival
8/22 Seattle, WA – Barboza *
8/23 Vancouver, BC – Cobalt *
8/24 Portland, OR – Mississippi Studios *
8/29 San Francisco, CA – Café Du Nord *
8/30 Los Angeles, CA – The Mezz *
8/31 San Diego, CA – Tin Can Alehouse *
9/3 Austin, TX – Mohawk
9/4 Houston, TX – Mango’s
9/5 New Orleans, LA – Siberia
9/6 Atlanta, GA – 529
9/10 Washington, DC – Black Whiskey ^
9/11 Baltimore, MD – Metro Gallery ^
9/12 Philadelphia, PA – Kung Fu Necktie ^
9/13 Brooklyn, NY – St. Vitus ^
9/14 Boston, MA – Cambridge Elks Lodge ^
9/16 Montreal, QC – Casa del Popolo ^
9/17 Toronto, ON – The Silver Dollar ^
9/18 Cleveland, OH – Mahall’s 20 Lanes ^
9/19 Pittsburgh, PA – The Warhol Museum (an Evening With)
9/20 Lexington, KY – Boomslang Festival ^
9/21 Chicago, IL – Hideout ^
9/22 Minneapolis, MN – Ice House ^
11/22-24  Camber Sands, United Kingdom – ATP Festival (End of An Era Pt. 1)
* with P.G. Six
^ with Dope Body)