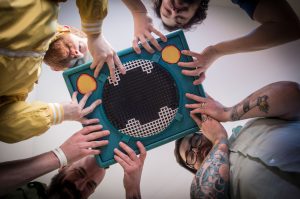 DC-based band, Typefighter is sure to ignite an absolute nostalgia kick for ’90s Pavement and Pinkerton-era Weezer among listeners. Set to release The End of Everything on April 22 via DC label Huge Witch Records , Typefighter has built a reputation in the nation’s capital for disarming melodicism.
With their debut full-length, the band has rewired its unique instrumentation into an arresting rock and roll record filled with pounding rhythms and roaring guitars. It’s a big, snappy sound that lives up to the raucous live sets the band has delivered on stage with bands like Here We Go Magic, The So So Glos, Givers and We Were Promised Jetpacks.
Ghettoblaster recently caught up with leader singer Ryan McLaughlin to discuss the record.  This is what he told us.
When did you begin writing the material for The End Of Everything?

We started writing for it about two years ago. We took our time developing these songs. Lots of demoing and experimentation.
What was the most difficult song to take from the initial writing stage through recording and mixing?  Why was it so troublesome?

‘Know it’s Wrong’ was a pretty new song when we made the record. We hadn’t spent much time with it and we hadn’t demoed it at all, but we decided ‘What the hell, let’s just go for it’. I ended up recording my vocals three times over before we got to the point where we were happy with it.
Which of the songs on the record is most different from your original concept for the song?
‘You When You’re Older’ started out as an acoustic folk song. I was playing it out a lot at solo shows with some success, but when we tried a full band arrangement it was totally boring. We kept the melody and threw out everything else. When we recorded guitars for it, Thomas and I were playing at the same time, staring at each other and trying our hardest to fuck each other up. A couple shots of Maker’s Mark later I recorded the vocals. That process seemed to give the song just the right amount of belligerence to keep it interesting.
Did you have any guest musicians play or sing on the record?
One of Will’s old music school buddies, Ricky Parrell, played sax on ‘Split Intent.’ He’s in the US Air Force Band and a monster player. We dragged him in to play a simple four note lead line, and it sounded fantastic. So, naturally we told him to play it like he wasn’t an amazing sax player and we buried it under a million other sounds playing the same thing. Oops.
Who engineered, mixed, mastered, and /or produced the record?  What input did those people have that changed the face of the record?
John Thayer (Drunken Sufis, Exit Clov, Guster) engineered/produced the first round of tracking for the record while we were all holed up in a cabin in the Green Mountains of Vermont. He had a huge hand in helping us establish a sound, direction, and feel for the record by encouraging us to take more chances and make more noise. When you’ve put so much care in your preparation, it’s easy to get locked in to one way of doing things. It was important to have John there to remind us to be spontaneous. A lot of my favorite things on the record are the ‘mistakes’ and other unplanned things that we just ran within the moment.
After that, we brought it home to DC with a feeling and direction in mind and finished tracking at Thomas’ studio, Persona Non Grata. Will and Thomas mixed it together, and true to form, they did it three times over! But in the end, we made it to a place where we’re all really happy with the outcome.
Is there an overarching concept behind the album that ties the record together?

The whole record, in one way or another, is about death. I lost a couple close friends in a short period of time while we were writing these songs. It wasn’t conscious, but it ended up having a major effect on my lyrics. Don’t get me wrong, the album isn’t meant to be a downer. It takes an upbeat and celebratory view of it in a lot of ways. But yeah, death.
Have you begun playing these songs live and which songs have elicited the strongest reaction from your fans?
Yeah! We’ve been playing most of these songs live for a long time now. Seeing how audiences react to a song is a pretty important and helpful step in the songwriting process. The strongest reaction we’ve seen has been to ‘Much’. The first time we played it out, a bunch of people came up to us and were like ‘That new song was awesome!’. That made our decision to release that as the first single much easier.\
(Visit the band here:
Website: http://www.typefightermusic.com/
Facebook: https://www.facebook.com/typefighter
Twitter: https://twitter.com/Typefighter)