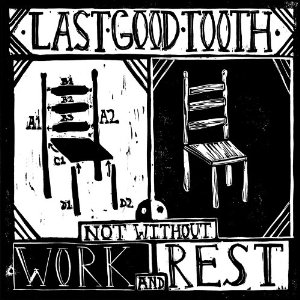 Not Without Work and Rest

Last Good Tooth started as many bands do – as teenagers interested in smoking a little grass and aping the sounds of their favorite bands.  In their case, the blues-influenced rock sounds of The Black Keys held highest billing in the minds of these youngsters.
Well before the sessions for their debut were underway, word of the band reached Team Love Records.  Their first visit to Team Love’s sleepy Hudson Valley headquarters found the band leading the cast of characters at their dive bar show in a drunken singalong of a Michael Hurley song.  Later they played along side an abandoned thespian camp to a field of hedonists and swimming-hole experts.  With this lasting impression in mind, Team Love made plans to release their debut.  Recorded over the summer and fall of 2011, Not Without Work and Rest, is the Providence, RI quartet’s stunning and warm freshman offering, which dropped in late-May 2013.
Ghettoblaster caught up with guitarist Penn Sultan to discuss the album.  This is what he said about their debut…
When did you begin writing the material for your recent LP?

The oldest song is no grandpa, but probably five years old. Newest song is a couple months old. Like my niece.
What was the most difficult song to take from the initial writing stage through recording and mixing?  Why was it so troublesome?

They all were great. No trouble. They love us. We love them.
Which of the songs on the record is most different from your original concept for the song?

“Lack One Lacks” both used to be a lame blue grass bum diddy shouting lameness. Now I like it. It’s very different from its former self.
Did you have any guest musicians play or sing on the record?

This kid Andy Rips the wacky trombone solo in “Some Kind of Pair”. We drank a lot… of water!
Diamond Doves (Brigham Brough, Nick Kinsey, Wyndham Garnett) did the nautical horn parts on “Tie Something Fragile”, and “To Whatever”.  They rule.
Jessicca Larabee from She Keeps Bees makes “What’s What I Do” a real song with her singing.
The Sugar Honey Iced Tea (Kate Jones, Laila Aukee, Ana Malazzi, and my pwep pwep Emily Shaw) sing the bigness on Beat our Days.
Who produced the record?  What input did that person have that changed the face of the record?

Long time super buddy Lucas Goodman (astro Raw, Lion Babe) .  He told us what takes were good and bad, made the sound big and not too clean.  Edited takes and kept it weird. Got real with the mixing and plug ins. He rules too.
Is there an overarching concept behind your new album that ties the record together?

Maybe working and resting? Sleep, No Sleep.
Have you begun playing these songs live and which songs have elicited the strongest reaction from your fans?
We play most of them yes we do. “Some Kind of Pair” live is great because there is a drum solo that is different and stupid every time. You should check it out.