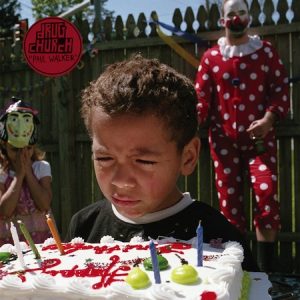 Drug Church is far from your typical band.  The five piece band, who describe their music as something “you can pushpit and stagedive to so you can forget for a moment that you have eczema and work at Pizza Hut,” makes music for the disenfranchised, loner punks with odd shaped bodies who’re more concerned with their record collection than they are with their love handles.
Borrowing liberally from bands like Seaweed and Quicksand, Drug Church released their new album, Paul Walker in July via No Sleep Records and it fuses street-punk mentality with brash riffs and gruff vocals on songs about literally “Learning To Speak British,” “Attending a Cousin’s Birthday Party” and “Reading Youtube Comments”.
Ghettoblaster caught up with vocalist Patrick Kindlon (whose work with the Deathwish Inc. podcast is one of our favorite things in the world) to get his hilarious take on the record.  This is what he said about it.
When did you begin writing the material for your most recent album?

Two months before we recorded it. Any longer than that and bands should check themselves. If you can’t write the album of the decade in 60 days, you can’t write it period.

All trouble is on my end. I’m about as incompetent a vocalist as they come, so things that should come easy become Braveheart-style tests of will. ‘Learning To Speak British’ is a fairly straightforward hardcore song, but for whatever reason my voice would not comply. That’s how the song got its name. No matter what I did, I sounded like I was on a BBC program about juvenile delinquency.

I had hoped to make ‘Thrill Hill’ into an alt-rock anthem where we could conceivably play alongside Bush at radio fests and maybe receive oral sex from 19-year-olds. But my vocals make it a hardcore song. So, no Bush. And no oral.

Did you have any guest musicians play or sing on the record?|

We brought in a thermin player for a part we needed to get extra weird. He’s the father of a member’s girlfriend and more talented than us.

No producer. We don’t believe in having a producer until you really sell out and get off on spending money needlessly. Hopefully, we’ll be there soon. Our man Mike engineered the record.

We thought the fast songs were going to go over best. But the slower, more melodic tracks have been getting a cool response. Maybe we are actually the alt band we want to be. Maybe our dream of playing alongside Bush isn’t dead yet.
(Drug Church hit the road with Raindance and In Between in September.  Here are the dates:
Sept 13 – York, PA – New Grounds
Sept 14 – Pittsburgh, PA – 222 Ornsby
Sept 15 – Columbus, OH – Kobo Live
Sept 16 – Detroit, MI – Genesis
Sept 17 – Grand Rapids, MI – The DAAC
Sept 18 – Chicago, IL – Junior’s
Sept 19 – Evansville, IN – The Hatch
Sept 20 – Cincinnati, OH – Fogarty’s
Sept 21 – Altoona, PA – TBA
Sept 22 – Philadelphia, PA – The Barbary)