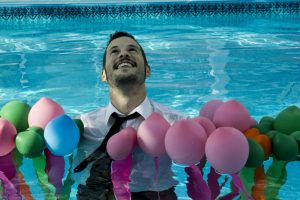 Nicholas Sebastian Naioti is MR NASTI, a singer-songwriter exploring themes of life and death. MR NASTI took shape when the Nashville-based musician moved across the country to embark on a month-long artist-in-residence program in Fairfield, Iowa at local music venue The Beauty Shop, culminating in the creation of a rock musical production. After completing the residency, Naioti remained in Fairfield, bursting onto the thriving Iowa music scene as MR NASTI.
MR NASTI is releasing his second full-length album Truth Sound on Maximum Ames Records on September 23. The album catalogs many changes in Naioti’s life during its recording. Truth Sound was recorded at Space Cabin Studio in Fairfield, IA and mastered at Focus Mastering in Omaha, Nebraska.
Ghettoblaster recently spoke with Naioti about the album, his collaborators and more. This is what he told us.
When did you begin writing the material for your new album?
I began work on Truth Sound three years ago. Since the beginning of this project, I’ve moved across the United States twice, slammed four tours, opened two food service businesses, purchased a house, started a podcast, and broke in a horse.
What was the most difficult song to take from the initial writing stage through recording and mixing?
Several of the songs on Truth Sound had been pieces that I struggled with, leaving untouched for years on end. I would frequently start over with a song, realizing that I needed to completely reimagine the concept and deliver it in a different style to convey the true feeling of the thing. The song “Stand Up Straight,” was sounding like a post-rock song with a very complex beat that just wasn’t working. After leaving it for dead for two years, I came across the old recording, scrapped everything but the guitar part, gave her a nice thumping beat and it started sounding like something real!
Why was it so troublesome?
There’s no way of knowing when you’ll be hit with inspiration. It comes erratically with no warning. Sometimes you have to set a piece aside and wait for the ideas to flesh it out. Sometimes they never come.
Which of the songs on the record is most different from your original concept for the song?
I recorded “Like A Wild Animal” to serve as a demo, and planned to change the style to fit the rest of the album. In the process of recording the demo, it started to dance in its own way. It had something, some mystical heartbeat. I fell in love with the demo as it was, touched it up, added some embellishments and kept it.
Did you have any guest musicians play or sing on the record?
I enlisted the help of many of my favorite musicians for this album. Anna Gebhardt of Annalibera contributed vocals on the album, cowriting the song “Change It”. Joel Gettys and Ryan Stier of The River Monks played drums and guitar respectively, plus Adrien Logsdon of Trouble Lights, Spoken Nerd, and several other awesome sweethearts were a part of this project.
Who produced the record?
I produced Truth Sound myself with assistance from friends. It was a blissful process.
What input did those people have that changed the face of the record?
I love what happens when you get people together on a collaboration. Often times some real magic can happen when you create collaborations between people that don’t even know each other. I chose musicians whose style fit the concept and I think the record benefits greatly from the diversity.
Is there an overarching concept behind your new album that ties the record together?
On this record, I tried to convey ideas that I find profound and compelling, while maintaining a tasteful subtlety, nuance, and soul. I’m inspired by the unique human struggle, the impossible challenge to understand death, the power of dreams, and the unlimited potential of mankind. I tried to take these broad concepts and make something timeless and nostalgic, yet relevant and modern.
Have you begun playing these songs live and which songs have elicited the strongest reaction from your fans?
I have been doing songs off this album for years. It’s awesome that many people will be able to sing along to the album after having seen me do the songs so many times. I believe it’s really good to play the songs for multiple audiences before solidifying the mix. You can feel what’s working and what’s not, refine the tone and sound of it, and really close in on the message you’re trying to convey.
(View and listen to MR NASTI here:
Video: MR NASTI – “Always Believe” (debut on Huffington Post) Stream: MR NASTI – “Change It” (debut on Portals) Stream: MR NASTI – “Stand Up Straight” (premiered on Surviving the Golden Age))