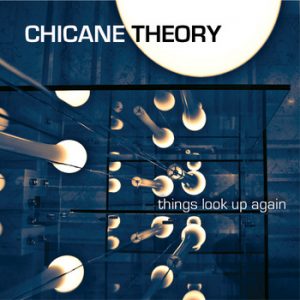 After a brief hibernation, Minneapolis-based rock outfit Chicane Theory is thawing out the winter’s cold with a new full-length album, Things Look Up Again.  Featuring a broad range of vintage guitar tones from dissonant speaker-ripping fuzz to hauntingly beautiful tape echoes, dynamic drum beats, and accessible vocal melodies, the album will make a comfortable fit in collections that already include quintessential releases by likeminded heavies like Nirvana, Pink Floyd, Jawbox, and Swervedriver.
Things Look Up Again was written, recorded, and mixed by bandleader Nicholas Roesler over a span of about two years and the extra time certainly paid off with strong songwriting, production value and a cohesiveness that is rare from most indie rock bands.  Peter Anderson (The Ocean Blue, Honeydogs, Polera) was brought in to record drum tracks at Flowers Studio and Casey Virock (Porcupine) added guitar and vocal overdubs to help put the final finishing touches on the album.
Ghettoblaster caught up with Roesler to discuss the LP, which drops May 7.  This is what he had to say about it…
When did you begin writing the material for your most recent album?
I started writing parts of some of these songs as far back as 2006, but I didn’t start recording/finishing album tracks until 2010-2011.
What was the most difficult song to take from the initial writing stage through recording and mixing?  Why was it so troublesome?
“Phobia” was probably the toughest to finish off because it was an idea that had been in my head for a long time and struggled with arrangement and what to do with the bridge.  I really liked the song and wanted to get it perfect.  It’s also sometimes hard when you record a demo and here it a lot, then re-record higher quality tracks and have to train your ear to let go of what the demo sounded like in favor of the more polished track.
Which of the songs on the record is most different from your original concept for the song?
I wrote the music for “Wake Up” then spent a while contemplating what to do with the vocal melody and lyrics.  Originally I was going to have an isolated vocal before each verse that said “I want to wake up the world” with some kind of effect on it, but the song took a slightly different turn stylistically with kind of a queens of the stone age meets strokes thing and completed what became the final lyrics and phrasing in one sitting.  The lyrics are actually about playing in the park.
Did you have any guest musicians play or sing on the record?
Yes.  My good friend and songwriter Casey Virock (Porcupine, Dream 13) added guitar to a track and also sang on three tracks.  I look up to Casey as a musical mentor and we have similar thoughts and approaches to music that fit well together.  The song “No Use” which features Casey’s guitar tracks, is influenced by Syd Barrett; who Casey initially turned me on to and now I consider Syd a big influence.
Who produced the record?  What input did that person have that changed the face of the record?
The record was self-produced by me and I’m pretty happy with how end product was in line with my initial vision for the songs.
Is there an overarching concept behind your new album that ties the record together?
Nothing really particular.  I like the lyrics to be a bit spacey and up to interpretation.  I named the album Things Look Up Again because I felt like the album represented a turn for the better in the band’s musical life (also a lyric from “Phobia” which is a pretty optimistic song).
Have you begun playing these songs live and which songs have elicited the strongest reaction from your fans?
Some of the songs were played live before we recorded them for the record.  From past shows, I think people seem to respond extra well to “Moments,” “Phobia,” “Corridor,” and “Fields.”  I’m excited for “Wake Up” and “Happily After” to debut live.  I think they will be fun.