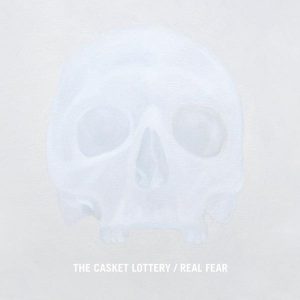 Kansas City indie rock band The Casket Lottery released their first full-length studio album, Real Fear, in over nine years on November 6 via No Sleep Records.   Strapped with an arsenal of moody, abrasive guitars, precision bass lines and mathy drumwork, The Casket Lottery return with their strongest album to date. Real Fear; is a beautifully cathartic, dreary-dreamlike swirl of grooving riffs that intertwine with singer Nathan Ellis’ relentless vocals, transcending into a euphoric intensity for the dark horse album of the fall.
The Casket Lottery formed in 1997 in Kansas City and consists of Ellis, who also is a current member of seminal hardcore band Coalesce, Stacy Hilt, formerly of Coalesce, and Nathan “Jr” Richardson, who previously performed with post-rock band The Appleseed Cast and is a current member of Coalesce.  The group spent the late ‘90s and early ‘00s touring the U.S. with bands like Small Brown Bike, Rocky Votolato and Limbeck among others, while releasing a string of full-length albums, EPs, 7”s and splits along the way.
Ghettoblaster recently caught up with Ellis to ask him questions about Real Fear.  Here is what he told us about it…
When did you begin writing the material for your most recent album?

We started writing the new songs about two years before the actual release of the record.  We spent a lot of that time figuring out how to write as a five-piece as opposed to a three-piece and then after we wrote the first four or five songs we figured out the real direction we wanted to go, so we re-wrote the first batch and kept going.

Nothing really comes to mind.  They all sort of wrote themselvles.

The song “Real Fear” initially sounded like a Beatles song so we really had to fuck that one up.

No, but Ed Rose usually does something.  I am sure he has a percussion track or something on there.  I don’t think he counts as a guest musician though.  He shouldn’t.  He’s practically always been a member of The Casket Lottery.

We’ve always worked with Ed Rose and he’s always had a huge impact on every recording process.  I think his input from  our first recording session with Nick, the Keyboard player, set the precedent for how he writes with us and what kind of layer he can add to our sound and songs.

There is.  I think it’s obvious and if it’s not it must just mean something else to someone else and that’s awesome too.

Have you begun playing these songs live and which songs have elicited the strongest reaction from your fans?
We have.  Our most recent show we played all but two of the songs and they all seem to go over well.  “In the Branches” and “The Moon and The Tide” seem to go over the best and they just feel great to play live.
(Stream “The Moon and The Tide”  from Real Fear here: http://www.youtube.com/watch?v=XAJ4isKxlvw)