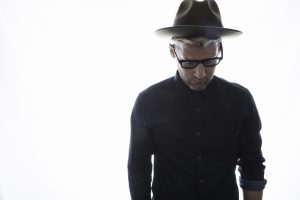 My Dead Air is the moniker of musician Dan Ballard. Ballard was a member and guitarist of the band Until June. Which had great success overseas with a #1 hit in Europe. After several albums, U.S. and world tours, things began to slow down for Until June. Ballard started My Dead Air as a side project but soon it became his main musical outlet.
The Thief Who Knows My Name was written, recorded and produced by Ballard, simultaneously within a nine month period. It was recorded at Dead Music Studios (Dan Ballard’s recording studio). It is the first full-length album for Ballard, who had previously released two EPs. Mixing was handled by Grammy winner Guy Massey, as well as Bryan Cook and Ryan Lipman. . Ballard’s studio is located in a basement of an old building right off the Pacific Coast Highway in Southern California. When Ballard decided to write the record he knew he wanted the record to be airy, ethereal and moody. The cold concrete walls and floor of his recording studio helped achieve the ambient nature of the record. “I wanted to create a record I would sit down and listen to. Something that was great in the foreground but also in the background. A record that provokes a mood or vibe that is relaxing”. The first song written for the album was “Holding On” which set the tone of the record and has many 70’s characteristics. Influences include Harry Nilsson, Glen Campbell George Harrison, Bon Iver, My Morning Jacket and a host of others. The Thief Who Knows My Name is based off of ten different stories / experiences ranging from stories about growing up and settling down, to childhood memories and experiences.
The Thief Who Knows My Name will be released on vinyl and digital August 14 and Ghettoblaster recently caught up with him to talk about it. This is what he told us.
When did you begin writing the material for The Thief Who Knows My Name?
Writing began sometime in mid 2013 but in January of 2014 I scrapped the entire record and decided to start over. In January it started with “Holding on” and the writing process continued as I recorded. I’ve always enjoyed writing during the recording process. I finished writing and recording the record in late September 2014.
Which of the songs on the LP is most different from your original concept for the song?
“Holding On” started off as a pretty chill song and one day when I was working on some drum ideas I thought I’d try something different. I tried a 70s disco beat and instantly I knew where the song was headed. My friend Dallas arranged strings that took it even further. It was probably my favorite song on the record to record.
Was your brother Josh involved in the recording of the record?
Not as much as I would have liked. Josh, played Rhodes and piano on a few songs and did some background vocals. Unfortunately our schedules didn’t align as much as we would have liked them to.
There’s a sense of the ’70s that kind of floats throughout the record. Was that intentional?
Yeah I get that a lot, especially with “Holding On”. It was never intentional, it just kind of happened. I’m a huge fan of late 60s and 70s music. I always loved Harry Nilsson, Bread and Glen Campbell. So much great music came out of that era and has influenced me over the years.
What are your touring plans for summer or fall? Might you be headed east of the Mississippi?
No plans set in stone yet. I’d love to get out and play some shows. If I do head that way it will be with a full band.
(Visit My Dead Air here:
www.mydeadair.com
www.facebook.com/mydeadair
www.twitter.com/mydeadairmusic)