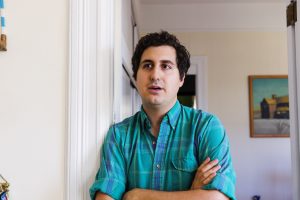 It’s been six years, seven if you’re reading this in the summer of 2015, since Mike Pace has been musically active in any public sense. That was the year that the well-loved, critical darling rock band that he fronted, Oxford Collapse … well, collapsed. They had a good run, with two albums for Kanine and two more for Sub Pop, all of which pushed for the revival of ‘80s minded collegiate guitar pop through the twinned nuclear winters of electroclash and the garage-punk revival, all but holding the door for groups like Vampire Weekend and Real Estate to rush in and achieve success.
In the interim, Pace moved to Austin, Texas with his wife while she finished grad school, eventually returning to a New York City that was much like he’d left it, where he co-hosted over 100 episodes of a podcast called Worst Gig Ever, where musicians, comedians and other performers took turns recalling their most painful resentments in service of their craft. He’s also been diligently working on music both as a career path and for his own edification. The eleven songs on Mike Pace and the Child Actors’ Best Boy are the fruits of those labors.
Produced by quantity rock critic and former Get Him Eat Him frontman Matt LeMay, who also added drums and additional instrumentation to the recording, Best Boy dashes between yearning, romantic rockers like “Summer Lawns,” “Cold Calling” and “Fire Sale,” off-Broadway production numbers such as “The King of Corona,” and gorgeous folk directions in “Would You?” and “Southern Cordial,” offering perspectives that range between Stamey/Buck-styled guitar mastery/historical refraction, punk rock, and try-outs for “Movin’ Out” in ways that add to each rather than stand apart.
Ghettoblaster recently caught up with Pace to discuss the record, which dropped in mid-January. This is what he said.
When did you begin writing the material for Best Boy?
I was recording little demos and making notes on riffs and ideas while I was living in Austin in 2009.  “Summer Lawns” started as a GarageBand demo and the skeletons for “Southern Cordial,” “Up the Academy” and “The King of Corona” were being built around that time.  Parts of “Blues for Atuk” existed as an early Oxford Collapse song called “Disco Nap,” dating back to 2002.
What was the most difficult song to take from the initial writing stage through recording and mixing?  Why was it so troublesome?
“The King of Corona” was probably the most difficult nut to crack.  The initial piano chord progression in the verses dates back to part of the score for a student film I worked on in 2009.  After I decided to “go pop” with it, I went through a few different chorus and bridge ideas, none of which stuck.  After a few years of chewing on it I eventually settled on the current incarnation, which I’d like to think has sort of a “classic” rock ‘n roll structure.  The Wurlitzer intro the track was difficult for me to record, since piano isn’t really my “main” instrument.  I think it took about 600 takes.  And even though I wrote the guitar solo at the end of the track, I couldn’t nail that either, so my main man/producer/guru Matt LeMay cut that.
Which of the songs on the record is most different from your original concept for the song?
“McKinley” was demoed as a full-fledged rocker and then later acousti-fied on suggestion by my mixer/engineer/svengali Matt LeMay.
Did you have any guest musicians play or sing on the record?
Dan Fetherston – who played drums in Oxford Collapse – keeps the beat in “Blues for Atuk,” which I mentioned had started life as an OXC cut.  Matt LeMay is all over the record, playing everything from drums to lead guitar.  My miniature schnauzer Baptiste plays percussion on “Best Boy.”
What input did LeMay have that changed the face of the record?
He produced, engineered, and mixed the record.  His sage wisdom and deft hand is all over Best Boy.  Matt’s input cannot be overstated, and quite simply the album would not have been made without his help.
Is there an overarching concept behind your new album that ties the record together?
Best Boy is about life, liberty, and the Pursuit of HappyNess as much as any record is.  It’s a collection of songs written over a roughly five year period that sort of seem to complement one another.
How did you get connected with Self-Starter?
I’ve known Chris Newmyer – who runs the Self-Starter Foundation – for years.  He briefly managed Oxford Collapse towards the end of our run.  As part of getting “back in the saddle” with the whole “making music” thing, I started playing small acoustic shows last year.  Chris, who I hadn’t seen in a few years, came to one of these shows and we then made plans to get dumplings at X’ian Famous Foods’ outpost in industrial post-apocalyptic East Williamsburg.  Chris mentioned that he was considering resurrecting the label, which hadn’t released any music in over ten years.  I was looking for a home for this album and it just sort of made sense to collaborate.
Have you begun playing these songs live and which songs have elicited the strongest reaction from your fans?
I’ve only played one live show with a full band, and that was for the record’s release.  Since these songs weren’t written with the intention of playing live a few of them (“Up the Academy,” “Kiss & Fly”) proved challenging to transpose to a four-piece line up.  Ultimately we pulled everything off and the audience dug it, but I think our selection of covers (Cheap Trick, Billy Joel, Rush) was what really killed with the crowd.
(Visit Mike Pace and the Child Actors here: http://www.mikepaceandthechildactors.com/.)

Tags: Featured, Mike Pace and the Child Actors, Self Starter