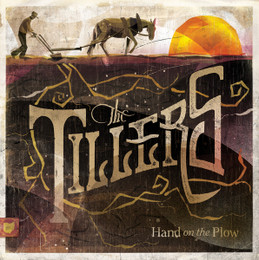 Hand on the Plow

The Tillers don’t just sing and play their homegrown brand of joyful, driving old-timey music – they holler, stomp, swagger, and swing, fearlessly throwing themselves into the music and winding up in the hearts of their audiences.  The trio hails from Cincinnati, just across the Ohio River from the hills of Kentucky and at the northwestern edge of Appalachian coal country, where much of the band’s traditional style comes from.   But they’re not your typical folk revivalists – the self-described recovering punk rockers balance the drive and grit of their roots in Cincinnati’s hardcore scene with the country traditions of their old-time material.
Recorded straight to tape, the band’s most recent LP, Hand on the Plow (which dropped via Muddy Roots Music Recordings in July), debuts the band’s new lineup. Featuring multi-instrumentalist Mike Oberst with brothers Sean Geil on guitar and Aaron Geil on the upright bass, The Tillers are at once heirs to the tradition of Appalachian song and protest, and relentless innovators of the genre.
Ghettoblaster recently had the opportunity to discuss Hand on the Plow with vocalist/banjoist/fiddleist,/harmonicaist,/kazooist Oberst.  This is what he said about it.
When did you begin writing the material for your most recent album?
I began writing on January 1 2012 as a project to write a song a day.  I only made it through 14 days but in that time period, came up with the lyrics for “Shanty Boat”, “Tecumseh on the Battlefield” and “Willy Dear”.  It was definitely one on my more prolific time periods! The music came along a bit later. Some of Sean’s songs on the album were taken from old writings from previous bands of his and Aaron’s in pre Tiller times. “500 Miles” was a song written for their old bluegrass band, Mt.Pleasant String Band and “I Gotta Move” and “Can’t Be True” we’re written for an old folk rock band, Motorcycle Tape Deck.  “Old Westside” was one that I wrote the day before our first recording session for Hand On The Plow.  I went to Sean’s house that night, showed him the tune and lyrics and we recorded it the next day.
What was the most difficult song to take from the initial writing stage through recording and mixing?  Why was it so troublesome?
I don’t think any of the songs ever gave us much trouble.  We practiced them quite a bit and would play a few at shows even.  We had a lot of time to hammer them out just the way we wanted them before the recording process started.  The only one that gave us the least bit of trouble was “Long Summer Day” just because there are some fancy chord changes throughout the progression of the song.  That didn’t take us too many tries on the tape though.

Which of the songs on the record is most different from your original concept for the song?
Songs move in their own direction from the initial writing to performing to last minute ideas in the studio.  It’s good to let them move a bit to become what they are intended to be.  I think the songs that took a little natural shaping were probably “The Road Neverending” and “Tecumseh on the Battlefield”.  Originally, Sean played his guitar part on “The Road Neverending” with finger picks.  He decided in the long run to use a plectrum for a stronger rhythm.  He also wanted a bridge part written and asked me to contribute a melody and lyrics to the song so that was added for more dimension.   “Tecumseh”, I had written originally as a fiddle tune only with war whoops in the B part of the song.  After a while I realized I wanted to tell a brief history of his life so I got to writing.
Did you have any guest musicians play or sing on the record?
Oh yes and we were lucky to have them!  “I Gotta Move” and “Weary Soul” are supported by the percussive sounds of Mark Van Patten and his snare drum.  Mark plays in the Cincinnati area with a great band called The Guitars.  “Willy Dear” is capped off at the end of the song with a traditional tune called “The Girl I Left Behind Me” where you’ll find the masterful fiddle sounds of Warren Waldron.  Warren has been fiddling for years and has taught us a lot about old time string band music.  His band is called the Rabbit Hash String Band. Finally, “I Gotta Move” features the haunting harmonica sounds of Col. J.D. Wilkes, best known as front man of the Legendary Shack Shakers, and also The Dirt Daubers hailing from Paducah KY.  It was a real treat to have J.D. be a part of the album as we Tillers hold his music in high regard.
Who produced the record?  What input did that person have that changed the face of the record?
The record was produced by Brian Olive.  Mr. Olive is a phenomenal musician and a recent Grammy award winner for his works with Dr.John.  Brian gave us direction mainly in not overthinking the tracks and keeping things simple.  When you get into the studio environment it’s easy to get into the mind frame of nitpicking the songs at playback.  He helped us to remember that it’s the songs with the best energy and emotion that make a great album shine.
Is there an overarching concept behind your new album that ties the record together?
In the time these songs were written we were working hard and playing harder.  Endless amounts of time booking shows around the country and trying to keep up with being a DIY band. There are so many bands out there doing the same thing and one of the main ways we’re all successful is because of each other.  Networking, sharing shows, putting each other up when we come to a new town and supporting each other’s music and art. We’re a big dedicated family. Think of the album as an anthem for all the bands like us working hard and sweating it out on the stage every night for the love of the good old time music.  A music that may not be the most popular but that is real and true and one that can be loved by any age or race. Keep your hand on the plow and HOLD ON is what we’re talking about.  Keep on keeping the music from the heart!
Have you begun playing these songs live and which songs have elicited the strongest reaction from your fans?
We started playing these songs for small shows in Cincinnati almost immediately after writing them.  Half the process of letting a song find its own way is by playing it live.  The emotion you feel within a song while trying to give it to another human being really helps to shape what that song will turn into.  Sometimes I think a song can just keep on changing, little by little, with every time it’s played.  I think folks are really bouncing around right now with what songs are the favorites.  Folks really seem to like “Shanty Boat”, “Old Westside”, and “I Gotta Move”, but I think I’ve heard different folks say they like every song on the thing and that makes us feel pretty great about it!  Me personally, I’m a fan of “The Road Neverending”.
(Visit The Tillers at: http://www.the-tillers.com.)