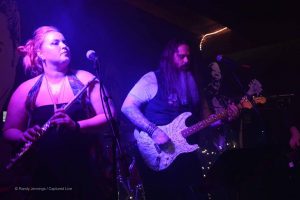 Dayton, Ohio’s Cricketbows recently completed their latest LP, Diamonds, which is scheduled for release this fall. The album was recorded in the spring of 2014 at The Diamonds in Cincinnati, Ohio, and produced by Grammy-winning producer Brian Olive (formerly of Soledad Brothers and The Greenhornes). It was mastered by Dave Davis.
“Brian Olive was an amazing guy to work with,” said Cricketbows vocalist/guitarist Chad Wells “He didn’t try to push us to be something that we’re not and whenever we’d start to glide into a direction that felt insincere, he’d pull us back. He was more interested in getting a great, truthful performance out of us – warts and all – than trying to polish us or do a bunch of takes to achieve some manufactured perfection.”
They recorded to tape using vintage processing and analog equipment and was recorded live mostly in one or two takes per song in only two sessions. Drummer Jim Ingram had this to say about the process:
“Working analog gives the takes a rich and earthy feel. I’ve done digital and analog recordings in the past. The mood, the feel, the entire oeuvre is different. The down side is having this valuable roll of tape that you want to leave as clean and unscathed as possible. So the pressure is raised a bit in terms of nailing things in as few takes as possible. With digital, you just erase and it never happened, and all you wasted was time and sweat. Analog is a good format for this band, though I’d never rule anything else out.”
Diamonds is the first Cricketbows album to feature a full band. The band consists of Wells, Aarika Watson (vocals, flute), Michael Bisig (guitar, backing vocals), Christopher Corn (bass, backing vocals), and Ingram.
“Diamonds has a more cohesive feel than previous Cricketbows releases and eschews some of the obvious trappings of ‘psychedelic rock’ by focusing first on songwriting and vocal interplay and by stripping most of the heavy layers of effects and processing – giving the recording a timeless sound that blends, folk, psychedelic, Americana and classic rock influences in a fashion that is epic and open but also very personal and introspective,” Wells said.
Today, Ghettoblaster has the pleasure of sharing a mini-doc/teaser produced by the band, and featuring their track, “Charcoal.” Enjoy: