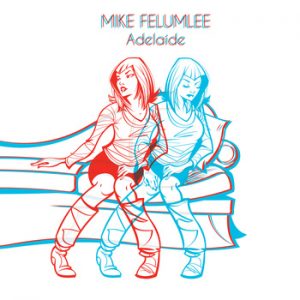 As a veteran of the respected punk scene of Chicago, Illinois, Mike Felumlee knows how to turn a three minute pop structure into something more than the sum of its parts. Perhaps best known for his seven year stint drumming for The Smoking Popes from 1991-1998, Mike also drummed for Alkaline Trio between 2000 and 2001, playing on their critically acclaimed, breakthrough album, From Here To Infirmary.
Mike launched his solo career soon afterwards, with his debut LP, 2001’s 64 Hours. This was swiftly followed by a fan-favorite split EP with Alkaline Trio bandmate Dan Andriano in 2002, which saw a vinyl re-release in 2012.
After spells with Duvall and This Is Me Smiling, Mike took an extended break from music to spend more time with his family, having spent over a decade as a working drummer. Changes to his personal circumstances led him to return to music in 2008, performing only a handful of times over the subsequent years, but playing and writing every day.
Mike reports to have written over 80 songs in the past five years, and while he remains modest in his aspirations, he’s also confident in the quality of his material, and is keen to share it with listeners old and new. With that aim in mind, he’ll be putting out an EP, and subsequent full length, through Stay Posi Records later in 2013.
Ghettoblaster recently caught up with Felumlee to discuss his forthcoming EP, Adelaide.  This is what he said about it…
When did you begin writing the material for your most recent EP?
I started writing these songs around 2009. I’ve written dozens of songs since then but these four seemed to fit together well so that’s why I chose them for the EP.

What was the most difficult song to take from the initial writing stage through recording and mixing? Why was it so troublesome?
“Near Adelaide” was definitely the most difficult.  I think it’s one of the more unique songs I’ve written melodically. Finding the right groove and instrumentation for that one is a challenge. I’m still not sure that I’ve nailed it on that one yet.

Which of the songs on the record is most different from your original concept for the song?
“Near Adelaide” again. The original demo was very different rhythmically and I used a lot more electric guitar as well as organ and piano. I liked the original demo, but I think the version I did for the EP is better with the instrumentation stripped down. I tried to let the vocal and melody really drive the song on the EP version. The rest of the songs sound very similar to the demos.

Did you have any guest musicians play or sing on the record?
I had a couple of guest musicians on the record. I played all of the drums, bass and acoustic guitars and did most of the singing. I had my friend Ken Nowka play some ukulele, a guy named Klaus played some lead guitar and my friend and co-writer Brian Birkland sang a couple harmonies on “Near Adelaide.”

Who produced the record?
I produced the record with some help from Travis Brown recording the drums and acoustic guitar tracks.
What input did Travis have that changed the face of the record?
Travis helped me select which songs to put on the EP. I think he did a great job suggesting those four songs. It was also his idea to keep them simple and straight forward as far as the instruments were concerned.
Is there an overarching concept behind your new album that ties the record together?
There’s not really an overarching concept here. I’ve never written that way very much except for my previous EP which was all about the TV show Heroes.

Have you begun playing these songs live and which songs have elicited the strongest reaction from your fans?
I’ve only played these songs live once so far. “We’ll Find A Way” seems to be the early fan favorite.