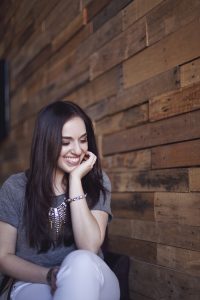 Over the last few years, Austin, Texas-based Mikaela Kahn has checked off many classic early 20s life milestones: graduated from college, moved to a new city, fallen in and out of love, embarked on her chosen career path. Of course her version isn’t entirely typical. College consisted of one of the world’s most acclaimed Jazz programs, and her career path included stints as a backup singer for an award winning Elvis impersonator and R&B luminary Chrisette Michele (including stops at Madison Square Garden and a support slot for R. Kelly). Still, these experiences helped Mikaela craft an extraordinary album out of the kinds of early adult experiences most anyone can relate to.
Mikaela’s debut full-length Milk & Honey is a collaboration with producer Justin Shelton. The album glides between pop and R&B touchstones, kicking off with the rousing lead single “Fire & Lace.” Expansive synth pads give way to shimmering guitar and a chilled out R&B groove before hitting the accelerator and shifting to a roll down the windows, shout the words in your car kind of chorus. Another standout, “Chemical Attraction,” sounds warped in from a 90s R&B/trip-hop dream. Mikaela rides the tightest groove of the record, sounding coolly sultry amid the retro, analog warmth of Shelton’s synths and guitar.
Ghettoblaster caught up with Kahn to discuss the album, which was self-released yesterday. This is what she said about it.
When did you begin writing the material for Milk & Honey?
I started writing the songs for Milk & Honey about two years ago, but at the time I didn’t realize I was writing songs for an album. I was just experimenting with a new style of writing and having fun creating! It wasn’t until later that I decided to combine the songs into an album. But that’s what this album was really about for me – going with the flow and following my gut. I didn’t want to think too hard about anything. I just wanted to do what felt right.
What was the most difficult song to take from the initial writing stage through recording and mixing?  Why was it so troublesome?
“Fire & Lace” was probably the most difficult song to complete. The whole writing, recording, and mixing process for probably took close to four months. I spent a lot of time working and re-working the melodies in that song and when I finally finished, THEN came the background vocals. That was almost like writing a completely new song. I really wanted a lush, warm sound for the backgrounds with lots of overlapping parts so I enlisted the help of Trenton Hull, a very talented friend of mine to help with the background arrangements. After many writing sessions (and much yelling) we finally got ’em done! Lots of work, but it was all worth it.
Which of the songs on the LP is most different from your original concept for the song?
That’s a great question! Because of my collaboration with Justin though, I was writing to semi-finished tracks. We tweaked things here and there – added a bridge, changed some chords, added words and melodies – but most of the songs stayed true to their original concepts. Adjusting the songs to be performed in a live setting, however, brought on many changes. For example, “Losing You” on the album is very power ballad-y, full of loaded guitar lines and pulsing synths. But when I perform it live I do a more pared down arrangement to showcase the true sadness of the song. You can see what I mean in a video we did for YouTube using only piano and upright bass.
https://www.youtube.com/watch?v=L4B7JTDbeu0
Did the entirety of your work with Justin Shelton consist of sending music back and forth? Or did you ever work together in the same room?
Honestly, I think we were in the same room a grand total of once or twice throughout the whole process. And when we were together we were already on the mixing stages. Throughout the writing process we relied solely on texting, emailing, facetiming, and good old fashion phone calls. Thank god for technology and those smart computer-phone thingies. 🙂
Do you have new music in the works?
Yes indeed! I’m working on some new collaborations with Justin, Jordan Burchill of The Rio Grande (a very talented singer-songwriter), and some solo stuff too! I’m always trying to stay inspired and keep writing.
(Catch Kahn live here:
04.16 • Stay Gold (Austin, TX – Record Release Show)
04.26 • Brass House (Austin, TX – jazz set)
04.30 • Harvest House (Denton, TX – Record Release Show)
Visit Kahn here: www.soundcloud.com/mikaelakahn.)