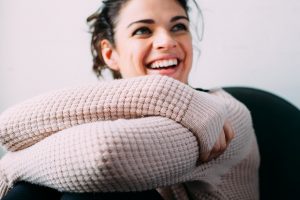 McClain Sullivan’s newest, Rachel, displays a powerful songwriting gift. This EP plays like a musical diary of McClain’s cross-country and cross-stylistic American life. Her voice is capable of anything from bluesy heartbreak to highly joyous and playfully provocative sound. At once angry and sly to heartbreakingly hopeful, her songs are written with a new musical vocabulary and are sung with a gut punch of rock, jazz, and pure soul.
Rachel reaches all the highs and lows that encompasses a life deeply lived, each song holding strong with a solid rhythm section, horns, and strings. Her pure love of rhythm and blues infused with jazz influences give a candid, confidential, impassioned treatise on life and love. Her melodies and words will linger in your head long after a first hearing.
McClain’s versatile talent and singular voice shines in any genre; from hip-hop and funk, to classic jazz, to confessional acoustic indie. She strives for honesty and genuine insight in her lyrics, with a broad spectrum of influences like Ani Difranco, Erykah Badu, and Sarah Vaughan. Her songs address the gamut of human emotion, dismantling past relationships with savage precision, incisive humor and uncontainable soul.
Ghettoblaster recently caught up with her to discuss the EP, which will be self-released on October 16. This is what she told us.
When did you begin writing the material for Rachel?
Rachel is a collection of my favorite songs from the last years. Some could say I started writing it seven years ago. Heh. Let’s just say I’m a bit of a perfectionist! I wanted to finally do a release where I told the stripped down story of myself, and to be able to do that I used a mix of new and older songs.
Which of the songs on the EP is most different from your original concept for the song?
Probably the first single “Happy Anniversary.” All of the songs went through a long process of stripping things away, and then adding other elements. Initially that song had no percussion or keys on it, which are now two of my favorite parts of the song.
You’ve lived in numerous major cities. What’s prompted all of your moves? Is it a desire to see it all, looking for the right fit to call home or something else entirely?
I have always had a crazy travel bug, but each move was for a different reason. Like, originally when I moved to North Carolina it was supposed to be for just a few months with two of my best girlfriends. We decided to take a break from New York, but I ended up joining a band within the first week, three years later I was still there! I am definitely staying in Brooklyn for the long haul now though…unless something comes up…okay, I might move again.
You’ve received comparisons to everyone from Sarah Vaughan to Amy Winehouse. Who do you consider your major influences?
There have been so many influences, and Sarah Vaughan is definitely one of the top. My father is a huge Jazz fan, and it was always on in the background. There was a lot of Erroll Garner, Thelonious Monk, and Nina Simone playing. Come to think of it, there is still. When I started studying Jazz my dad was totally beside himself.
When I really started writing my own music I was listening to a lot of female songwriters, Ani Difranco, Liz Phair, Tracy Chapman, Erykah Badu, Joni Mitchell, and Jill Scott. They all had a huge impact on the way I write. All of them are so different from each other, but the common thread is that they have such a strong lyrics.
Do you have a regular band you record and perform with? Or is your backing band more of a revolving door?
Some of the players on the album I have been playing with for years. In fact one of the guitarists and I were in a band together when I was fifteen. How is that for old school? When I perform I usually try to keep the same guys with me on stage, because they are awesome, and the longer you play together the tighter you are on stage.
Speaking of which, what are your touring plans for fall?
I am, and as we all know by now, I love being on the road. We are starting on the east coast in October, and then December 19 we end the this tour stretch in my hometown, Seattle. If I have it my way though we will be right back on the road when we get back.
(Visit her here:
http://mcclainsullivan.com http://facebook.com/msmacsully http://twitter.com/mcclainsullivan