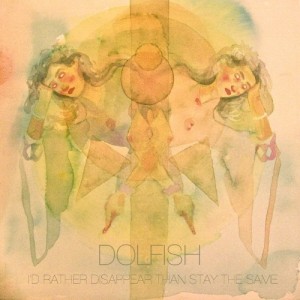 Adopting the moniker Dolfish, Cleveland-born songwriter Max Sollisch made serious waves last December when Afternoon Records, which is also home to John Vanderslice, released his debut EP, Your Love is Bummin’ Me Out, on vinyl.  The witty, lo-fi record met praise from all the biggest taste makers who compared the 23-year-old to everyone from Neil Young and John Darnielle to Guided By Voices and Times New Viking.

For the first proper Dolfish LP, Sollisch enlisted producer and label-mate Patrick Tape Fleming (of The Poison Control Center) to help with the effort, which he recorded in the living room of a friend’s apartment in downtown Des Moines, Iowa. Five days later, I’d Rather Disappear Than Stay the Same, which Afternoon Records unveils on October 30 was in the bag.  The record features a backing band of all Iowa musicians whom Max had only met upon arriving in Des Moines. Tracked live with little overdubbing, these 12 songs were rarely rehearsed giving the record a spontaneity and rawness rarely achieved on a studio album.

Ghettoblaster recently caught up with Sollisch to discuss the record.  Here’s what he told us…
When did you begin writing the material for I’d Rather Disappear Than Stay the Same?
This record has songs that were written as long as three years ago, though the early tracks have been reworked a bunch of times. Most of the songs were written in the last year or so.
What was the most difficult song to take from the initial writing stage through recording and mixing?  Why was it so troublesome?
I’d have to say “Grown Ups.” Though the recording of this song went smoothly enough, it is the most painstakingly personal song on the record and my attachments created anxiety that we wouldn’t be able to portray the song the way I heard it in my head. Patrick Tape Fleming, who produced this record, really shined with this track. All of the effects he created live on the fly with a second vocal mic sent thru analog delay and into a tube amp down to the basement…this creates the creepy ambiance that really plays up the emotional delivery and lyrics.

Which of the songs on the record is most different from your original concept for the song?
“God Is The Loneliest of Lovers” for sure. I had only written the lyrics to this song before we chose to make it a casio beat driven waltz. We just really went for it. Live I perform it on acoustic but I’m so glad we took this where we did in the studio.
Did you have any guest musicians play or sing on the record?
These Iowa Musicians gave these songs life.
The Dolfish Studio Band(its) are:
Chris Ford: Organ, Drums, Trumpet
Derek Lambert: Bass, Drums
Patrick Tape Fleming: Bass, Noisy DI Guitar Solo, Effects
Dustin Harmsen:  Upright Bass
Dylan Boyle: Dobro on track 8 and rippin’ slide tele solo on track 9
I did all vocals, acoustic and some electric guitars, banjo, organ, tambourine, and when I wasn’t good enough they stepped in and got the job done.

Who produced I’d Rather Disappear Than Stay the Same?  What input did that person have that changed the face of the record?
Patrick Tape Fleming of The Poison Control Center, one of my adulthood heroes, produced the record. It was his idea to record the album with these musicians…he hand selected all of them and was on the money with every choice. Throughout the process he forced me to “get weird” with the songs and allowed me the confidence and comfort needed to deliver the right performance. He may be my biggest fan and i may be his…haha. We certainly didn’t agree on everything but in the end we created an album that we both were completely proud of. You’d be hard pressed to find a more passionate, creative person on this earth.
Is there an overarching concept behind your new album that ties the record together?
Pretty much anything was fair game…relationships played a huge role…I simply write when it comes to me, regardless of the subject matter…if it’s good, most of the time it makes the record. I feel that all of these songs were meant specifically for this record…it’s hard to say why they just do I guess.
Have you begun playing these songs live and which songs have elicited the strongest reaction from your fans?
I’ve played all of these songs a bunch live and the responses have been really great! I’d say the one nowadays that gets the strongest response is “Grown Ups” but “God Is The Loneliest Of Lovers” is a close second. So fun to see the crowd’s response. People are such good listeners…I get such thoughtful feedback. Live performance is definitely my favorite aspect of music.
(Download this rad song in MP3 format here: Dolfish – “I’d Rather Disappear Than Stay the Same”)