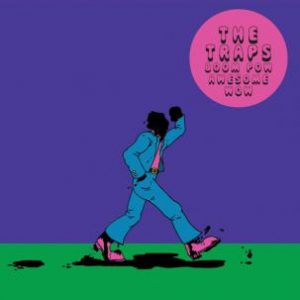 The Traps’ Boom Pow Awesome Wow is a grimy bit of gold from the vaults by John Dwyer of Castle Face.  According to Dwyer, this is what one needs to know about the band:
“From Providence Rhode Island circa 2003-2004.
Very very heavy.
Very very simple.
Recorded in an unwaveringly care-free manner.
3 young men:
2 very mellow dudes playing guitars thru towers of fried amplification.
1 very loud dude from Illinois playing what sounds like a bass drum and a 40″ ride cymbal.
Coachwhips played with them, then I came home and tried to rip them off, but I wasn’t man enough to fit these balls in the front seat.”
Basically, Dwyer seems to have discovered the band, collected a bunch of tracks from their CDR only EP and four tracks from a box of cassettes, spit-shined it with mastering and dressed it up with artwork by Dusty Petersen.
Ghettoblaster recently caught up with Matt Trap, now the drummer/vocalist of duo Party Pigs, to discuss the release.  This is what he told us.
When did you begin writing the material for the album?
When I first moved to Providence in 2003.
What was the most difficult song to take from the initial writing stage through recording and mixing?  Why was it so troublesome?
None. We were playing for such a short time we never had writer’s block. Recording consisted of pressing play and record at the same time on a hand held cassette recorder so if we had been drinking a lot sometimes that was hard to do.
Which of the songs on the record is most different from your original concept for the song?
I don’t have original concepts. I had a drumset and they had guitars. What happens when a beat collides with a riff is what makes a song and if you don’t like the way it sounds I got another beat.
Did you have any guest musicians play or sing on the record?
No. I think there were maybe 10 people in the Providence/Boston area that knew we even existed.
Who produced the record?  What input did that person have that changed the face of the record?
John Dwyer, he took a bag of 10 year old cassette tapes that was stuffed in a closet under God knows what and turned knobs until a fantastically raw trash rock album came to life. The man deserves the richest chocolates and the finest silks the land has to offer.
Is there an overarching concept behind your new album that ties the record together?
One should drink loudly.

When you were playing these songs live, which songs elicited the strongest reaction from your fans?

People liked “Boom Pow Awesome Wow”, but I always like “Missed the Mark” and “Beer Pinata”.