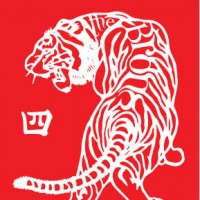 While the Mayan apocalypse was a dud and apocalypse talk petered out, the world is quickly approaching a devastating phenomenon, the long-awaited, forthcoming self-titled new album from the Bronx (out February 4).  Though the band spent the last few years focusing on their side gig, Mariachi El Bronx, they’ve put down their sombreros and strapped on guitars for what is sure to be one of the most fierce rock albums of 2013.
Ghettoblaster recently caught up with The Bronx vocalist Matt Caughthran, to discuss their first album in over five years, IV.  This is what he said about it…
When did you begin writing the material for your most recent album?
We started writing for Bronx IV about a year before we pressed record. A lot of the tunes started out on the road.
What was the most difficult song to take from the initial writing stage through recording and mixing?  Why was it so troublesome?
Hardest song was a tune called “Torches.” It was uncharted territory for us. It was the last vocal we recorded. Barely made the record.
Which of the songs on the record is most different from your original concept for the song?
“Life Less Ordinary” is a tune we literally tried a thousand different ways. In the end it sounded best with just guitar and vocals. Simplicity.
Did you have any guest musicians play or sing on the record?
No musical guests this time around. Just us regular meatheads.
Who produced the record?  What input did that person have that changed the face of the record?
Our good friend Beau Burchell produced the record. We did our first demos in his garage so pretty much part of the family. Having Beau involved just kept the record at an easy pace. It was centered and relaxed.
Is there an overarching concept behind your new album that ties the record together?
Not really an overall message. I think stepping away from the Bronx for five years put us in a reflective state of mind both sonically and lyrically.
Have you begun playing these songs live and which songs have elicited the strongest reaction from your fans?
Been playing the tunes live now for a couple months. Feels so good! “Too Many Devils” is a personal favorite.
(Here is a teaser for the new album: http://youtu.be/Flv7R80LDOo.)