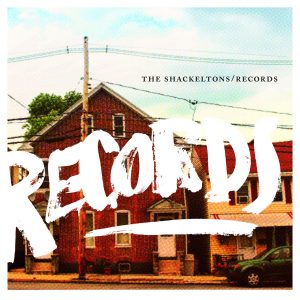 The Shackeltons had all the makings of a band to watch about five years ago – great reviews, blistering live shows and tastemaker radio championing the band.  All of that was sadly sidelined when singer and principal songwriter Mark Redding got word of his mom’s terminal cancer diagnosis.  Mark decided to put everything on hold so he could spend whatever time she had left at her side only recently returning to playing music.  Here is the outfit’s first release since 2008, a fine slice of post-punk from PA titled Records.
Spin said this of the band: “What makes bands like Pixies, Fugazi, and Les Savy Fav so exciting — and what makes the Shackeltons, from Chambersburg, Pennsylvania, similarly thrilling — is a breathlessness, a creeping sense that crouched behind the towering melodies and heard-’em-before razor guitars (think Television, in addition to the aforementioned bands), there’s complete breakdown. A half-dozen times on their debut, the Shackeltons sound completely convincing, and that’s about six more times than most bands ever manage.”
We agree whole-heartedly, so Ghettoblaster caught up with Redding to discuss the record, which drops via TLE Records on April 22, and was recorded by our good homie David Klug.  This is what he said about it.
When did you begin writing the material for Records?
This recording has been in the works for the past four years.  Due to the fragile nature of life, my band members and I took a break so that I could care for my mom.  I was in LA mixing the record with Tom Biller (Warpaint, Liars, Beck) and was touched by Tom’s reaction. Tom’s eyes watered up as he told me about mixing the vocals/words into the music. He realized this record was coming from a place few have expressed (a recording about losing your closest friend, your mother).  Tom said we made a “universal record” that was not whining- but a record of hope, trembling, and love’s return.
What was the most difficult song to take from the initial writing stage through recording and mixing?  Why was it so troublesome?
The band has always worked out the struggling in rehearsals.  Each member owns their own parts, and stands by what we lay down.  We leave all the resolved drama on tape. We get the difficulties out before we go to the studio.  One song, “Black Mary” (7:14 in length) is an epic journey of a song, due to the nature of its many musical turns and narrative.  Mary is a mysterious lady who pulls a cart around town and used to tell me she was watching out for my mother.  Mary’s words in the song are verbatim to words she spoke to me in person.
Which of the songs on Records is most different from your original concept for the song?
We pretty much keep our recordings true to what we have always played.  We did add a group chorus to “The Ache”.  Other than that, the record is true to original forms of the songs.
Did you have any guest musicians play or sing on the record?
Teodross Avery (Verve Records) played sax on “Call Call” and “The End”.  Teo has played on records for Aretha Franklin, Lauren Hill, Joss Stone, and Amy Winehouse.  He’s played live with us in NYC and Philly, and it’s been an incredible honor and thrill to have him on our team. He has since moved to the west coast.  Out of sight, but not out of mind.
Who produced the record?  What input did that person have that changed the face of the record?
The record was recorded in Pittsburgh by David Klug and mixed in LA by Tom Biller.  Tom recorded and mixed our last record.  Tom’s mixes are royal.  I went out to LA a couple times to sit in on mixing sessions, work on levels, and to add some vocal parts.  I would say the record was produced by all parties involved:  The band, David, Tom, and myself.  It took me over a year to find a record label to listen to the record. Think Loud Entertainment (our new label home) is perfect fit.  We are label mates with Live and Dana Alexandra.  Jeremy Weiss (label president) and the members of Live knew of our band, and believed in this record.  They are the game changers.
Is there an overarching concept behind your new album that ties the record together?
The ache of this life will someday be met by equal joy/love, and then some.  As Otis Redding said, “A little pain in my heart just won’t let me be.”  “Somebody gotta stop it”.  We are all waiting for some sort of redemption.  When it comes, it comes in waves, and makes good on all those graves.  Johnny Cash’s cover of “Ain’t No Grave” says it quite well enough.
Have you begun playing these songs live and which songs have elicited the strongest reaction from your fans?
We are playing these songs live. “Kindest Words”,  “Call Call”, “Lights” and “The End” have been fan favorites.  The whole record is a vibration worth it’s thrill.
(Visit the band here: www.theshackeltons.com
https://www.facebook.com/pages/The-Shackeltons/131406023552572
theshackeltons.bandcamp.com)