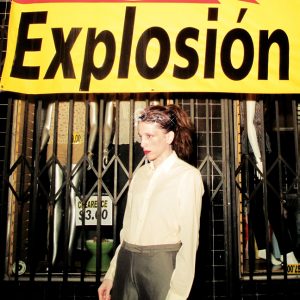 One would be hard-pressed to think of a more quintessential go-to artisan for serene avant-pop than Lisa Papineau. She has swung her hammer in experimental theatre, producing/narrating films as well as soundtrack work but will be most well known for her own mold-breaking voice – which Tori Amos once declared to have “…the power of Bon Scott and yet the lyricalness in the voice of a reed instrument…”
Papineau can possess an unmistakably hushed yet still-beating heart-in-hand vocal style, pioneering a sound that has helped define a spectrum of streamlined sub-emotion to independent music, with vocal timbres and melodies that are haunted and unsettling as much as they are earnestly heartbreaking. One may even know her voice before they know her name, as we almost couldn’t keep track of her prolific collaborations with, among them, Air, M83, Jun Miyake, Anubian Lights, her appearances on the (Academy Award nominated) Pina, Watchman and Crow II soundtracks, as well as her own projects, early career Pet (signed to Tori Amos’ IGLOO imprint), Big Sir (her long running project with Mars Volta bassist Juan Alderete) and her self-named group.
On her third and newest solo record, Blood Noise, Papineau has woven a intricate and brittle tapestry of her illustrious career’s culmination, where the nine songs successfully create their own microscopic world that runs a vein through each song’s respective atmosphere, resulting in an escapist’s fantasy who’s duality would effortlessly make a bloodshot appearance on “Morning Becomes Eclectic” after being up all night partying in dance hall.
Ghettoblaster caught up with Papineau to discuss Blood Noise, which drops October 8 via Neurotic Yell.  This is what she said about it.
When did you begin writing the material for Blood Noise?
Most of the material was written 2011 to early 2013, with a big break during 2012 while I was dealing with health issues. The song “Little Light” was an orphan song from a few years back that finally found it’s tribe with these songs.

“Rainmaker”, I would say. Writing it was easy… it came together very fast. Figuring out which arrangement would be best for it was the hardest… It really works well as a simple drone/ semi-acapella piece, which is how I first imagined performing it… but then I started hearing a kind of simple R&B beat under it ( ala. “Have You Seen Her?” by the Chi-lites.) Johan, Matthieu and I tried out that kind of arrangement and it fell together really well, but I still struggled against the “idea” of it while I was recording. I thought it needed to be more reverent. So much so, that I initially made the decision to record the final in the drone-y approach with just synth and vocal, but it didn’t sit right. So then at the last minute, called up the guys in France (I was in LA at the time) and asked them to get together and record their drum, bass and baritone uke parts while we were all one the phone together. Then they sang their backing vocals for the outro. From there, I threw my flute, additional bass and other little things on… it finally started to occupy its own natural place between a chant and a ballad.

Did you have any guest musicians play or sing on the record?
A number of friends and people I work with in other projects.
Matthieu and Johan of course, Juan Alderete (Mars Volta) from Big Sir, Tyler Bates (composer for 300, Guardians of the Galaxy) from Pet and a new project we’re writing together, Matthew Embree (RX Bandits) from Me&LP, Cgak (RX Bandits), who’s project Technology I’ve written and sang for, fancy pants Nick Reinhart (Tera Melos), Crooked Cowboy who I’ve been performing with for almost 10 years. Jun Miyake has done a string remix of Little Light. A whole bunch of cherries on top of the sundae! Hmm, that sounded weird.

I produced the record… The biggest decision on this album was to try and go with as many first takes and sketch ideas as possible… to let them stand as they first came out, for better or for worse, off key honks, church lady singing less cleverness and all. Even the changes I made on “Rainmaker” had to work with the original performance. This kind of approach is nothing new, many people are comfortable with it, or good enough to do it as such, but it was a personal challenge I had to give myself… as many of my collaborators can attest, in the past I’ve sometimes gone to extremes to chase some idea of perfection that has probably crunched the life out of some final performances.
On this album, I probably would have chased for less whispery singing on some parts, but given that singing reflects how my body was feeling at the time… it seemed more honest to leave things be. I don’t know, I guess we’ll find out! Juan and I just did a Big Sir hardcore digital riot album of some of the material from Before Gardens After Gardens, on which I am banshee screaming and ululating the entire time, so perhaps that will balance things out.

Is there an overarching concept behind your new album that ties the record together?
Escape. Most of my dreams and fantasies have been about that in one way or another all my life. I was always struck by the story of the Selkie who was trapped on land in her human form when her fisherman husband hid her seal skin. One day, she finds where he’s hidden it, and even though she loves him and loves their children, the call to return to her true nature, to the sea, was too hard to resist and she transformed and swam away. But does she get away scot free, or does she pine for what’s she’s left behind? Is she able to swim as far away into the wild as her desire can take her, or does she remain stuck in the harbor, always looking on to see how those on land are faring?  When I thought about the question, I said to myself, “not very Zen,” but maybe the struggle with wishing to run away gets to the very question of things. In making this album, I also did a lot of thinking about what the difference between running away and letting go is.

Have you begun playing these songs live and which songs have elicited the strongest reaction from your fans?
We have performed “Little Light” and “Out for a Swim” together.  Both feel wonderful but still a little scary to play. Jo plays glockenspiel and sings second lead instead of playing drums on “Little Light”, and we are still experimenting with the free form opening for “Out for a Swim”.  I did do a simple live version of “Rainmaker” of just vocals and synths with Emma Ruth Rundle (from Marriages) that was really fun… she’s amazing.
(See Papineau perform at one of the following dates:
11.23 • 40 Years Tanztheater Pina Bausch Festival (Wuppertal, Germany w/ Jun Miyake)
11.28 • Orf Radiokulturhaus (Vienna, Austria w/ Jun Miyake)
12.01 • Clandestino (Faenza, Italy)
12.04 • New Raindogs (Savona, Italy)
12.05 • Carmen Town (Brescia, Italy))