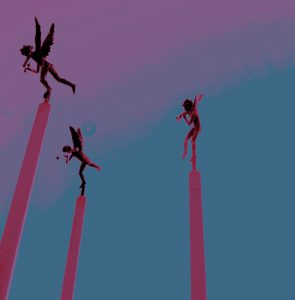 To London Or The Lake

Hailing from the dark and gothic streets of Philadelphia (where even Edgar Allan Poelived for a spell) come Night Sins, a project taken on almost entirely by singer/songwriter Kyle Kimball. Last year saw the release of their debut LP New Grave, a modern day dark wave classic with nine blistering tracks that touches on early Skinny Puppy, Sisters Of Mercy and Peter Murphy.
Hot on the heels of a recent U.S. tour with Youth Code, the band are preparing for the release of their second full length, due out on Avant! on December 10. On Night Sins’ sophomore release To London Or The Lake , you can immediately hear a more focused and defined Kimball, with a more polished sound that now brings in traces of Gary Numan’s catchy synth leads and Siouxsie’s vocal melodies, but still keeping the driving guitar reminiscent of The Mission or The Cult. The LP will be released on 33 rpm 12” vinyl, limited to 500 copies, with full-color printed inner sleeve by the way.
Ghettoblaster recently caught up with Kimball to discuss the LP.  This is what he said about the killer forthcoming record.
When did you begin writing the material for your most recent album?
Last year, pretty much as soon as I finished New Grave.
What was the most difficult song to take from the initial writing stage through recording and mixing?  Why was it so troublesome?
The first song on the record, “Air Dance”. It was also the first song I wrote for the record and the first song we recorded.  There’s a certain expectation that has to be met when you start recording. I felt like I had to get everything the way I heard it in my head before we continued, so that song probably took longer than any other.
Which of the songs on the record is most different from your original concept for the song?|
I don’t think any of them.  The producer always adds his own small touches but they pretty much come out sounding how I envision them.  I scrapped one song on the LP because it didn’t come out the way I imagined it.  Maybe I’ll rework it and release it one day.
Did you have any guest musicians play or sing on the record?
No guest musicians really. Chris Betts who had been playing with me live played bass on the recording, I did everything else.
Who produced the record?  What input did that person have that changed the face of the record?
Arthur Rizk.  He added his two cents to everything and had an immense amount of input.  I demo the drums live with actual drums and then he constructs them digitally so all the sounds you hear on that front come from him.  He has the greatest ear.  Check out the new Power Trip LP or the new Inquisition record for other projects he’s been a part of.
Is there an overarching concept behind your new album that ties the record together?
To London or the Lake comes from a letter Madame de Stael wrote to her lover during the reign of terror.  She was exiled in Switzerland while he was in England, and she could not get to him because of the perils that were taking place in France.  She was resolved in either facing all danger to see him or killing herself.  She said, either I go to England or the bottom of the lake.  This LP is about the worst longing.
Have you begun playing these songs live and which songs have elicited the strongest reaction from your fans?”
I played “Evangeline” and “To London or the Lake” on the Youth Code tour I just did.  I think people enjoyed them, but I can’t really say.
(Visit Night Sins here: https://www.facebook.com/nightsins.)