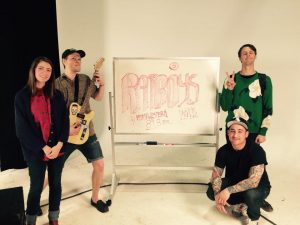 Hailing from Chicago and its South Suburbs, and coming soon to you, the members of Ratboys have no qualms scurrying through the streets to meet up and make music. What started out as a spacey, acoustic two-piece playing secret shows in dorm rooms, has morphed into a post-country foursome that simply cannot deny the power of rodent rock.
They recorded the first rat record, AOID, at The Owlery in Chicago and are now ready to put it all out there via Topshelf Records during this almighty year of 2k15. The folks in Ratboys find themselves addicted to the sensation of quiet growing into something bigger, and they can’t wait to welcome you into it.
Ratboys will release their AOID album via Topshelf Records on June 9. In addition to streaming their debut LP on Culture Collide. The album is also available as a free/pay-what-you-want download on their Bandcamp page.
Ghettoblaster recently caught up with vocalist Julia Steiner to discuss the record. This is what she told us.
When did you begin writing the material for AOID?
The ‘band’ first got together when Dave and I met on the first day of their freshman year at Notre Dame. We started playing music, mostly drunk bluesy late night jams lamenting ND’s arcane code of conduct and such. Eventually (and very much on a whim) we decided to record some songs I had written that year and in high school. After putting out the resulting RATBOY EP, Dave and I started playing shows as a two-piece (acoustic guitar and bass) around Notre Dame and Chicago’s south suburbs.
What was the most difficult song to take from the initial writing stage through recording and mixing?  Why was it so troublesome?
The summer after we released the EP, we decided that adding an electric guitar and some light drums to the live show wouldn’t hurt. After playing with a rotating lineup for a few months, we settled into a groove and solidified things a bit. We’ve been playing some of the songs (“Charles Bernstein,” “Our Mortician’s Daughter,” “Postman Song”) on the album since this period of (relative) stability started (circa mid-2012).
The writing process wasn’t really affected much by the general swell of the band, as I wrote all of the songs in isolation and then brought them to the guys to flesh out. They’ve definitely changed over the course of many shows and jams, though, and it’s genuinely exciting to approach playing them with a fresh mind every night on tour.
Which of the songs on the record is most different from your original concept for the song?
The songs on the debut rat record are pretty spread out as far as origin points are concerned. “Postman Song” was the first (at all listenable) song I wrote, back in 2007 when I was 15. “Tixis,” “Pivotal Dates” and “And” were all written in 2013 in Dublin, and the rest of the songs were written in 2012.
Did you have any guest musicians play or sing on the record?
We were pretty lucky to have a flexible and relaxed recording schedule, collaborating with our friend Seth Engel at the Owlery in Chicago. We started out recording drums (with our former drummer and forever friend Pat Kennedy) in September 2014 and gradually added bass, guitars, vocals and little touches right up until the end of the calendar year. The recording process itself was rarely stressful (if at all) – we lit lots of ‘sporty’ incense sticks, drank tons of Gatorade and kept it very true.
How did you get hooked up with Topshelf
We connected with Kevin and Seth via our friend Mike P from the band Dowsing (in which Will plays drums). Mike passed the album along, and everything progressed pretty quickly from there. We’ve been fans of bands on the TS roster for years now (especially Sundials, Enemies and Donovan Wolfington), so holding down that same fort now is a very happy honor for us.
When does the record drop? Have you begun playing these songs live and which songs have elicited the strongest reaction from your fans?
The rat record, AOID, comes out officially on June 9, the day after this run wraps up. Before we head out again for four weeks in July, we’re planning to shoot a little music video in Oak Forest. Also, just found out we’re going to open up for Someone Still Loves You Boris Yeltsin in Chicago on June 27, which is DOPE. We’re going to start jamming out the next rat record during August and September, and then the plan is to join Dowsing for a full U.S. tour in November and December. 2k15 is one huge thrill!
Also, the film Ratboy – of which we only just became aware and which sadly has nothing to do with our band name – is must-see cinema. HIGHLY recommended by our rat crew.
(Visit Ratboys here: https://www.facebook.com/ratboysmusic
Catch the band live here:
6/02 – Cleveland, MS @ Hey Joe
6/03 – Memphis, TN – House
6/04 – Nashville, TN @ Exponent Manor
6/05 – Lexington, KY – Best Friend Bar
6/06 – Indianapolis, IN @ Grammaw’s House
6/07 – Champaign, IL @ Death Tower
6/08 – Rock Island, IL @ Theo’s Java Club)