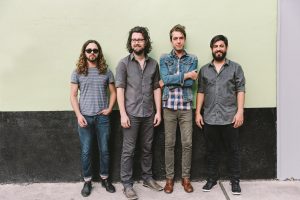 Joyous, uplifting, almost (dare we say) spiritual. All words to describe Jacksonville, FL’s psych-pop outfit Sunbears…
The band has amassed a devoted national following after years of touring, critically lauded releases, and of course, their sensory stimulating live shows. 2014 continues to be a banner year for the band; they hit the Spring festival circuit, celebrating a five-year anniversary with a limited vinyl issue of their much-loved 2009 EP Dream Happy Dreams, participation in the Flaming Lips-curated Sgt. Pepper’s tribute album (along side MGMT, My Morning Jacket, Phantogram and Miley Cyrus), and of course the much anticipated release of their second full-length Future Sounds on boutique indie label New Granada.
Recently upgrading from the long-standing lineup of duo Jonathan Berlin (vocals, bass, guitar, keys) and Jared Chase Bowser (drums), the band has expanded to an honest-to-goodness classic rock-n-roll lineup, welcoming JAX pals Walter Hill (guitar, keys) and Jordan Allen Davis (guitar, drum pad). This expansion affords the luxury to move and breathe, especially in the live setting.
Ghettoblaster recently caught up with Berlin to discuss the album and this is what he told us.
When did you begin writing the material for the Future Sounds?
We started the writing process in about May of 2013 and began recording shortly after. We only spent about four weeks actually tracking then it went to mix with Jeremy S.H. Griffith. The album was finished in August 2013. Been getting ready to release this thing for a while!
What was the most difficult song to take from the initial writing stage through recording and mixing?  Why was it so troublesome?
Hard to say! It was all kind of a whirlwind and during that month of tracking, we just kinda set everything else aside and knuckled down. Never really felt like we hit a wall at any one stage. However, I will say “Love” and “A Sad Case of Hypersomnia” didn’t really come together until Anton and Lewis Patzner composed strings. So we were kinda shooting in the dark on those songs until we got to the string stage. So much of those songs depends on the string arrangement… didn’t quite feel right till they were in there!
Which of the songs on the LP is most different from your original concept for the song?
Well, we self produced this time around. Everything was kind of done without a lot of outside influence, didn’t really show anyone “rough mixes” or anything, so original concepts really stayed intact from start to finish.
How did you get hooked up with Wayne Coyne and the Sgt Peppers tribute record? Did you meet Maynard?
Haven’t met Maynard yet! Everything was done via text or email and Wayne orchestrated the whole thing… Wayne asked us to do a song last year at the Gasparilla Music Festival, where we were both performing. We were all taping together this giant balloon amalgamation, that Wayne later threw into the crowd during their performance, when he popped the question. I asked him what I needed to do and he said, “Pick a song!” and here we are today.
Your new record will be coming out on ReANIMATED vinyl. Sounds exciting, but also confusing. Can you elaborate?
Did ya see the video on youtube (http://youtu.be/SWQ5TsuraF4)? You need too! It’s pretty confusing for sure! But, basically the technique is pretty old.
It’s like old world strobe animation… I was watching a movie with my son one day and there was this old strobe toy with a spinning disc with an image of cowboy riding a horse. I didn’t know what that thing was called, so I looked into it. Well, it turns out it’s called a Zoetrope and people make all kinds of crazy animations and spin them. So I decided to put it on a vinyl! You have all these little pie slices of animation and when you film the disc spinning with your iPhone or hold a strobe over it, the animation comes to life! But it has to be the right frame rate, so me and my buddy Mitch Chichocki made an iPhone app that strobes your flash at the right frame rate! So anyone with an iPhone can make this thing work! Pretty cool technique!
(Visit Sunbears here: http://www.sunbearsmusic.com/.)