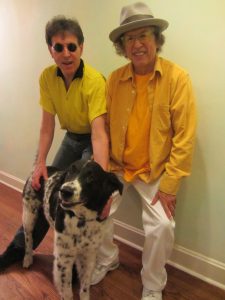 The team of Stephen Kalinich and Jon Tiven has an extensive and extremely impressive combined resume, but resting on laurels is something they refuse to do on their upcoming new album Each Soul Has a Voice, which was released via MsMusic July 3. Their respective compositions have been sung the world over by Beach Boys both as a group and as solo artists, B.B. King, Paul McCartney, Wilson Pickett, Alex Chilton, P.F. Sloan, and literally hundreds of others.
Kalinich got his start in the mid-’60s supplying thought provoking lyrics to the Beach Boys as they sought to mature as a group and began to establish themselves as solo artists. More recently, he’s collaborated with the legendary but reclusive L.A. songsmith P.F. Sloan. It was P.F. Sloan who initially introduced Kalinich to Tiven.
Tiven started out as a rock journalist, then embarked on a songwriting/producing career that would find him connecting with most of his heroes. Tiven made his professional stage debut in 1974 with Big Star at Max’s Kansas City and his recording debut the following year performing on The Rolling Stones’ Metamorphosis album and Major Lance’s “I’ve Got a Right To Cry.” In the years since, Tiven’s had his songs recorded and performed by countless Blues, R&B and rock giants. More recently, he’s performed with the Alabama Shakes, Bettye LaVette, Warpaint, Plan B, and Steve Cropper among many others.
Ghettoblaster recently chatted with Tiven about the endeavor. This is what he said.
When did you begin writing the material for your most recent album?
Steve and I write on a fairly regular basis, so in essence the day we finished writing the last album we dove right in to begin the creative process for this album. And we stepped up the pace, as we were very inspired by the reception Shortcuts To Infinity/Symptomology had gotten, so we wrote sometimes two songs a day. We ended up with a wealth of material, the final songs were chosen from probably 700 finished songs.
What was the most difficult song to take from the initial writing stage through recording and mixing?  Why was it so troublesome?
None of them were troublesome, but the most involved was “rude awakenings,” as it grew from a spontaneous jam between Brian May and myself, it was just him playing guitar and me on bass, with a metronomic kick keeping time. I overdubbed the rest of the band—full drum kit, slide guitar, horns—and then sent it back to Brian to see what he thought. It gave him a kick, but I don’t think he really was ready for Stevie’s lyric, which he reacted to immediately in an enthusiastic and positive way. But he wanted to fix a few notes from his original guitar track, So I turned it over to him, I emailed him the multi’s, He sent everything back to Mark Linett and Mark turned it into the godlike work that it is.
Which of the songs on the record is most different from your original concept for the song?
“Harmony Innerpeace and Tenderness.” Mark really took this into a whole different place, he made everything work in a completely different way that I originally had mixed it, but way better. That’s the thing about working with Mark, you know he’s going to turn your track inside out so you’re never quite sure of what you’ll end up with.
That was part of the attraction of making the record, really, to see what Mark—who is a great artist at what he does—could do to make our creations more interesting.
Did you have any guest musicians play or sing on the record?
Steve Cropper and Brian May each wrote and played on one track apiece. Gabriella Gray sang some backgrounds on “Explosions of Love,” which features the lyrics not only of Stevie but of our good friends Keith Reid, who wrote “Whiter Shade of Pale’”s words as well as all of Procol Harum’s. Keith and I have collaborated before, we wrote a song for Jeff Healey Band’s first album that paid for my house, and he’s one of the all-time greats, so we were happy to include him as well.
Aside from that it’s all Stevie, Sally, Cody Dickinson, and myself. A few other guest drummers who are listed, Mickey Curry, Todd Tariq Snare, Anton Fig, Steve Ferrone, Greg Morrow, all tremendous players.
Who produced the record?  What input did that person have that changed the face of the record?
Stevie, Mark Linett, and myself produced it, so we have total control. The inmates run this asylum.
Is there an overarching concept behind your new album that ties the record together?
Anti-materialism, anti-workship of celebrity, anti-nonauthentic behavior.  Pro-spirituality (the good kind), pro-human, pro-animal.
Have you begun playing these songs live and which songs have elicited the strongest reaction from your fans?
We have only done one gig as ourselves and none of these songs were written then. We plan on bringing them to the stage this summer. But you guys have to buy the records and get the demand for us because somehow these clubs owners have to know that there is interest in someone seeing us live. We live outside of the boundaries of record business reality. We have gotten this far without a manager, agent, a publisher pushing our shit—-we’re a couple of musical terrorists, compared to most. We are outside the system. So it’s all on our fans to be as demonstrative as possible to get these venues opened up for us. Thank you for giving me this forum to beg.
(Visit the group here: