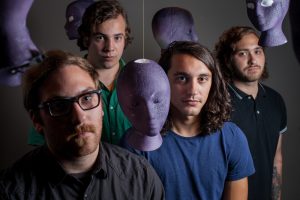 Amidst this modern dark age of musical redundancy, Undesirable People come from Detroit, Michigan, to deliver an eclectic breath of fresh air to the rock and roll enigma.
Forming in 2010, Undesirable People went on to self-release three EPs (Undesirable People, Eugenics, and Former Self / Current State). With extensive self-funded touring, and a determined focus on D.I.Y. ideals, the band has proven how to work within the ever-changing, internet age of being a band in the 21st century. Leaving their mark on the Midwestern music circuit, as it has become harder to tell what is real and what is fake in the depleted, over-saturated music industry.
After five years as one of Michigan’s most revered acts, Undesirable People began writing and recording their first full-length record at Rancho Recordo with producer Marc Jacob Hudson.
Eternal Vision of A Blind Future melds together an unprecedented sound, culminating in an echelon of hard, rock-driven riffs, bluesy rhythmic meters, and lyrics to make Bukowski think.  Undesirable People have merely begun their journey towards eradicating the radio elite, and begin with Eternal Vision of A Blind Future.
The quartet, comprised of vocalist/bassist Mark Lebiecki, guitarists Brian Fraser and Caleb Sanchez, and drummer Jon Lebiecki want you to feel as if you are watching the walls of MTV collapse and burn in your face through their wall of sound. A middle finger to the mainstream ideas of idolization, the group takes a stance on exactly what you worship and why? Diminish your apathy; stand up to the herd opinion; stay undesirable.
Ghettoblaster recently caught up with Lebiecki to discuss the record and this is what he told us.
When did you begin writing the material for your most recent album?
The process of writing this record started around 2012. A lot of it ended up on EPs. There was a lot of trial and error, scraped songs, and recycled riffs.  We also had most of these songs fully recorded on our own before losing the originals to some ruthless hackers who held it for bitcoin ransom.
What was the most difficult song to take from the initial writing stage through recording and mixing? Why was it so troublesome?
The very last song on the record, “Part 8.” We brought it in as a tune with only guitar in mind. It eventually turned into a full band song in the studio. Marc Jacob Hudson really helped elevate it into a big closer. We try to have our shit together before we hit the studio for situations like this. So I can’t really say it was too “troublesome.”
Which of the songs on the record is most different from your original concept for the song?
Not much changed when we went in to record most of these songs. Maybe some tempos here and there? Already having them all recorded on our own before going in really helped us go in and lay them down with minimal change, which in return saved us a ton of time and money.
Did you have any guest musicians play or sing on the record?
Larry Labeck ripped pedal steel on “The Left Behind.” We had so much fun watching him track. Also plan to do something like that again.
Who produced the record? What input did that person have that changed the face of the record?
We worked with Marc Jacob Hudson at Rancho Recordo in Fenton, Michigan. Marc allowed us to let everything happen naturally. We like to consider ourselves a very “organic” (is that generic to say nowadays?) band so it was a huge plus to record without click track and all of us together in the same room.
Is there an overarching concept behind your new album that ties the record together?
I’d say the concept lies more within the band itself. This is the first chapter. Eternal Vision Of A Blind Future says a lot about humanity this day and age. The idea of inspiration and passion that we all share, seeding through all these different generations on this planet. Music is powerful for the four of us as individuals. Others may find power elsewhere. I bet if we could all pull our heads out of the god damn TV screen shut off the wifi connection, we could truly feel real interactions (again) and never forget them.
Have you begun playing these songs live and which songs have elicited the strongest reaction from your fans?

We’ve actually been playing only new songs on the last couple tours and the reaction has been so great. I’ve noticed “All We Want Is A Proper Burial” seems to be a head knocker
(Visit the band here: https://www.facebook.com/undesirablepeople.)