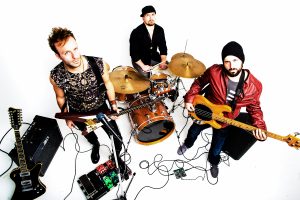 theSHIFT’s ability to craft earth-shattering rock filled with vibrant depth and a forceful punch is on full display with 7th Direction, which was released on April 14.
Comprised of John Shannon (vocals/guitar), MJ Lambert (drums) and Ben Geis (bass), theSHIFT come from a wide-ranging music spectrum. Shannon has recorded and toured with top-national acts like John Mayer, Lauryn Hill and Ben Harper, and also composed music for comedian Louis CK’s live specials and hit FX series, Louie.
Lambert and Geis’ musical roots lie deep in the world of hip hop, having backed legends Big Daddy Kane and Slick Rick. Despite continuing to be in high-demand for session work, the trio has made theSHIFT their primary focus, determined to inject rock with the rebellious boldness lacking in today’s climate.
theSHIFT is constantly on the road, bringing its vivacious rock n’ roll spirit to life onstage. The trio will continue to tour nation-wide to support release of 7th Direction.
Ghettoblaster recently spoke with Shannon about the EP and this is what he told us.
When did you begin writing the material for 7th Direction?
It all started coming together in the few months leading up to the recording. We pieced the forms, tempos etc. together into what felt like the best vibe for this group of songs.
What was the most difficult song to take from the initial writing stage through recording and mixing?  Why was it so troublesome?
Honestly, every song went pretty smooth. We were definitely inspired to be working through George Martin’s old Neve in the studio. We took the time to prepare for the session, plus working with Jamie Siegel kept everything flowing nicely.
Which of the songs on the EP is most different from your original concept for the song?
We didn’t really have any concepts that were written in stone. We knew what the parts and forms were going to be in general but at the same time left room for any “studio magic” to happen, i.e. ideas that come in while recording.
Did you have any guest musicians play or sing on the EP?
No we didn’t. We felt compelled to keep it the three of us so we could explore what that sound is and what that sound was becoming.
Who produced the record?  What input did that person have that changed the face of the EP?
We co-produced the album with Jamie Siegel, who helped guide us into the most effective sounds for the songs in tracking and mixing along with subtle ideas to keep the songs focused and consistent musically and energetically.
Is there an overarching concept behind your new EP that ties the songs together?
The recording title and idea of the 7th Direction is definitely the tie in concept. In Native American culture, there are 7 directions: East, South, West, North, Sky, Earth, and then the 7th is Within. This is the kind of “within” that ties into the outside world and cosmos as well – connecting the inner and the outer. These songs all have something to do with going within or reflecting on something within yourself. An inquiry and not just a decision about what things “are.” In that way, these are reality questioning lyrics and a way of directing music energy for that purpose.
Have you begun playing these songs live and which songs have elicited the strongest reaction from your fans?
Yes, we’ve been playing all of these songs live. The reactions are different every night and in every town. Right now we usually close with “Dreams,” which does tend to get an excited reaction.
(Stream the album here: www.popmatters.com/post/192100-theshift-7th-direction-ep-stream-premiere/
Catch the band live here:
Apr 24 – Pittsburgh, PA – Pittsburgh Winery
Apr 25 – New York, NY – Rockwood Music Hall (Stage 2)
May 29 – Philadelphia, PA – Kung Fu Necktie
May 31 – Durham NC – Pin Hook
June 3 –Asheville NC – Asheville Music Hall
June 4 – Anniston, AL – Cheaha Brewing Company
June 5 – Dothan, AL – The Plug House
June 6 – Titusville, FL – Bar IX
June 11 – Jacksonville, FL – Jack Rabbits
June 12 – Bourbon Street Bar and Grill – Myrtle Beach, NC
June 13 – Charleston NC – The Mill
June 14 – Knoxville, TN – The Bowery
June 16 – Charlotte, NC – The Tin Roof
June 18 – Richmond, VA – Strange Matter
June 19 – Hoboken NJ – Maxwell’s
June 20 – New York, NY – Rockwood Music Hall
June 24 – Burlington VT – Radio Bean
June 25 – Albany NY – Parish Public House
June 26 – Dover, NH – Dover Brick House)