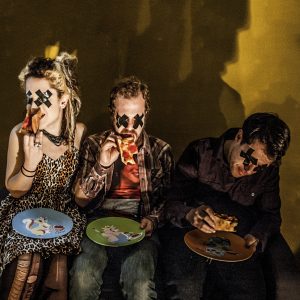 Over the course of their first three records, Brooklyn-based indie band Unicycle Loves You have transformed from a jangly power pop quintet to a post-new wave quartet to a garage-psych trio into the fourth chapter in the evolution of the band: The Dead Age. Opening with an exhausted woman’s voice gasping “Oh my god!”, The Dead Age builds off of the heavier sound of Failure. Crafted meticulously, often pushing the tonal limits through a massive wall of sound, melodies explode into chaotic free falls where screaming guitars and mammoth-sized bass bend at the will of ULY simultaneously paying homage to Mascis and Beefheart.
Scheduled for release on June 10, produced by lead singer/guitarist Jim Carroll and mastered by the renowned Bob Weston, if Failure was their mission statement to add a dirty, unpolished edge to pop music, then The Dead Age is the sound of Unicycle Loves You completely dismantling it.
Ghettoblaster recently caught up with Carroll to discuss the record and this is what he said about it.
When did you begin writing the material for your recent album, The Dead Age?
The majority of the album was written and recorded throughout the first half of 2013, but the songs “Falling Off” and “Any Daydreaming Morning” were leftover from our last album recorded back in 2011 that didn’t quite fit at that time.
What was the most difficult song to take from the initial writing stage through recording and mixing?  Why was it so troublesome?
The title track “The Dead Age” was probably the most difficult from writing to mixing to this because we recorded the drums before the song was even fully written. I only knew that I wanted it to sound massive. So we just did tons of drum takes and used what sounded best from each take. Endless hours of mixing followed. But the hardest song to mix overall was “Endless Bummer”.
Which of the songs on the record is most different from your original concept for the song?
We’ve developed a recording process where we build upon the demo tracks to maintain that raw feeling and to preserve whatever “magic” that might have been captured the first time through. That way all of the songs remain exactly how we set out to create them. They can also kind of take on a life of their own that way.
Did you have any guest musicians play or sing on the record?
Nope. It’s all us.
Who engineered, produced and mastered the record?  What input did they have that changed the face of the record?
I engineered, mixed and produced the record myself. As with the last two of our three previous albums, I decided to stick with Bob Weston for mastering. He’s just got such a great ear for what we’re shooting for and I can always trust that he truly gets it. There have been a few reviews of this album that have said that their least favorite part of it is the mastering and then will say that they don’t like “what Bob did to the mix”. These people have absolutely no idea what a mastering engineer’s role is. They’ve probably never listened to a Guided By Voices or Thee Oh Sees album either. Bob Weston is a true master of his craft and he creates the perfect glue that binds our sounds. If you’ve got a problem with the mix, well that’s all me. Maybe they shouldn’t have wasted their money on those shitty Beats headphones.
Is there an overarching concept behind your new LP that ties the record together?
Over the course of making this album, I came across a few cliche moments where I’d find myself saying, “Fuck it, this is the last album I’m ever doing.” While that’s probably not going to be the case, it did subconsciously make for some great concepts about death throughout the whole thing. When I first played my demo of “Face Tattoo” for our bassist Nicole, she said she loved it because it sounded like zombies. Not the ’60s band The Zombies, just zombies. Capturing that feeling and shooting to get that reaction really stuck with me throughout the rest of the recording process.
Have you begun playing these songs live and which songs have elicited the strongest reaction from your fans?
Yeah, once we feel comfortable with a song at rehearsal we play it live immediately. Closing our sets with “The Dead Age”, we’ve really felt a great response from the crowd. It’s a tough monster to follow. It just sounds like “the end”.
(Preview material from the album here:
“Face Tattoo” (MP3)
“Falling Off” (MP3 + Video)
“JAWS” (MP3)
Catch the band live here:
6/07 – Brooklyn, NY – Radio Bushwick (Album Release Show)