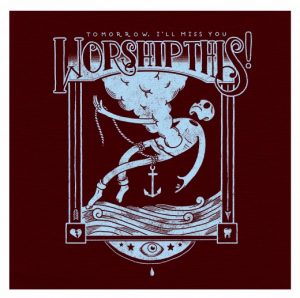 Cleveland/Akron punks Worship This! recently signed to A-F Records, the label owned and operated by Anti-Flag, and dropped their full-length debut, Tomorrow, I’ll Miss You, yesterday. With introspective songwriting, a weathered disposition and a keen ear for melody, the sound of Worship This! is pleasantly familiar, but (given their location) has much more of a Midwestern bent than a lot of other melodic punk bands.
Ghettoblaster caught up with Worship This!’s Jeremy Provchy and Josh Taylor to ask them about their fantastic new record. This is what they said about it…
When did you begin writing the material for your most recent album?
Pretty much immediately after we recorded The Nard Years in August of 2011 we started writing for the record. At that point in time we had a couple of the songs written and debated whether or not to put them on the 7″ and decided that they were already going in a bit of a different direction. (Jeremy Povchy)
What was the most difficult song to take from the initial writing stage through recording and mixing? Why was it so troublesome?
Musically things just seemed to fall into place pretty naturally, but lyrically, “I, Human” was definitely one of the most challenging songs for me. The lyrical structure of the finished product is far different in comparison to the way we’d played it in the months leading up to recording. I always felt like it had the potential to be a strong song, but the initial melody didn’t hold up to how good the song was musically. I also had a different idea for the songs overall meaning, which was another underlying cause for my doubt. In the studio we actually recorded the song both ways, with a different lyrics and melodies for each version. The reworked take ending up coming out far better than the previous, so we went with it. We’re all happy with the how the song came out and the feel of the new arrangement. (Josh Taylor)
Which of the songs on the record is most different from your original concept for the song?
I think “I, Human” was the song that was worked and re-worked the most. As Josh previously stated, we had an entirely different melody and lyrics that we had grown used to in the months prior so it took a little getting used to and we are stoked that we kept the one that’s on the record. (JP)
Did you have any guest musicians play or sing on the record?
Our friend Allison was passing through Columbus while we were down there and stopped in the studio to hang and she ended up singing on “Anathema” and “Whatever Happened To You Melissa,” which was really unexpected and added an element we otherwise didn’t plan for. (JP)
Who produced the record? What input did that person have that changed the face of the record?
The record was engineered by our friend, Eric Cronstein, at The Tone Shoppe in Columbus, OH. Eric’s input on the songs was pretty crucial for us. Even though we’re mainly a “plug and play” type of band, his encouragement toward forming a definitive sound for our band was extremely helpful and I feel this is the closest we’ve came to that sound through all of our recordings thus far. (JT)
When we went into the studio I had only met Eric a couple times in passing, but after hearing the records he’s done for our friends we knew we wanted to work with him. We immediately hit it off with him on a personal level which I think was huge in this type of a setting. He made us feel at home, which in turn helped the process run smoothly. Eric seemed turned off when we jokingly referred to him as a “producer”. That term can definitely carry a lot of ugly connotations. I think of him as more of a talented artist who is capturing a moment and he’s really fucking good at it. He had some suggestions that we rolled with and it ended up making the song groove better, but he didn’t tell us what to do or encourage us to do something we didn’t feel good about. We definitely all left the studio stoked that to have made such an awesome friend. (JP)
Is there an overarching concept behind your new album that ties the record together?
Initially, there wasn’t. We kind of just had these songs, and while we were recording them we realized that a lot of them dealt with past relationships that we’ve had and lost. Although some songs deviate from this, the majority reverts back to this underlying theme. (JT)
Yeah, these songs just kind of came out and they were definitely a reflection of the shit that was going on in our personal lives. I thought it was really cool how cohesive it came out considering we have three different people writing songs. I think it reflects on how close of friends we are and watching each other go through some pretty awful shit while this record was happening seemed to stir up similar feelings with everyone else in the band. (JP)
Have you begun playing these songs live and which songs have elicited the strongest reaction from your fans?
We’ve actually played nearly all of them live. I’d say that “Red Herring” and “Bike Ride” seems to have resonated the strongest with people at the shows. (JT)
Yeah, we’ve incorporated them into our set slowly, but I’m really stoked to try these songs out on the road and see what the response is after the record comes out. (JP)
(Worship This! have released a new video for “Indifferent.” Watch it below.

Worship This! – Indifferent from TurnStyle Films on Vimeo.