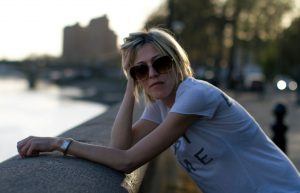 Janie Price, aka Bird, is a half English, half Irish London based singer/song writer and multi-instrumentalist and will release her third album, Figments of Our Imagination on August 14. Figments of Our Imagination showcases Bird’s musical prowess as she plays every recorded instrument on the album herself. The album was produced by legendary Rolling Stones board-man Chris Kimsey in London and mixed by Lee Groves in New York.
Bird was six years old when she first picked up a cello and joined the local youth orchestra. She continued to play in throughout her childhood but her teachers thought her too undisciplined as she swayed in her chair. She later found an outlet for her passion at a place with seemingly no limits to self-expression, behind the drums in an all girl punk band, where she swayed even more.
Her professional career aged 18 with her first recording session composing and recording strings for a UK rap act. This heralded the start of a session career which saw her singing and playing cello with numerous signed artists, notably doing a world tour for internationally acclaimed violinist Vanessa Mae and composing and recording cello for the UK hit artists Just Jack and Emeli Sande.
In addition to being a musician and songwriter, Bird was also invited to star in a six episode run for Sky Arts called Art of Survival filmed playing her musical compositions across Europe. She has also written her first book (based on her filmed adventures) titled, A Real Journey, originally printed in 2011 by Beautiful Books. Bird will be making her way over to the U.S. in late summer to support the release.
Ghettoblaster recently caught up with Bird to discuss the LP. This is what she told us.
When did you begin writing the material for Figments Of Our Imagination?
Almost two years ago.
What was the most difficult song to take from the initial writing stage through recording and mixing?  Why was it so troublesome?
“Lucky,” because it was written for my aunt who passed away just before I started making the album. In fact, she’s the reason I started making it so I really had to get this song right…musically it needed to be a real challenge for me in order to honor her, so I worked and reworked this track a lot.
Which of the songs on the record is most different from your original concept for the song?
“Small Town” started out conceptually as rock and ended up quite dance and pop.
Did you have any guest musicians play or sing on the record?
No, apart from some hand clapping and backing vocals on “Love Love Love” by legendary Rolling Stones producer Chris Kimsey and my engineer Al Lawson. I wrote and played all the instruments on this album
Who produced the record?  What input did that person have that changed the face of the record?
Chris Kimsey produced the first six tracks with me. Mainly it gave me more confidence as a musician. He’s a brilliant producer and taught me a lot. He also introduced me to the Casio MT-40 and Farfisa which became major features, especially in the later tracks.
Is there an overarching concept behind your new album that ties the record together?
The main thing for me with this album was that I wanted it to be really from me. No co-writes, no one else playing the instruments…most of the time, you buy an “artist’s” album, but there are many people involved in the songs. I wanted people who buy this work to really be receiving something made by me, not co-written by a huge team at a major publishing label with the music performed by loads of session musicians.
Have you begun playing these songs live and which songs have elicited the strongest reaction from your fans?
Still very early days for the live shows. In fact the first gig is planned for early July in London…so I don’t know which the fans are going to like best.
(Check out her video for “The Dare” below:
)